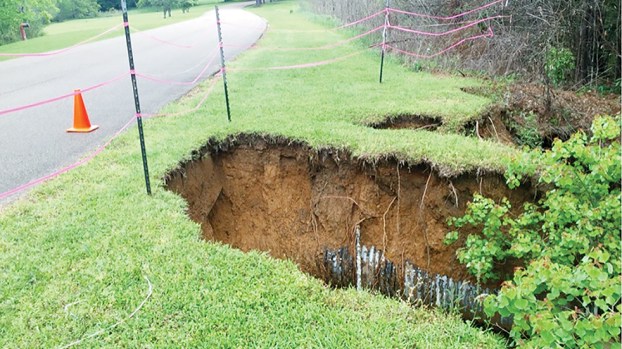 Photo submitted/A failed drainage ditch is the subject of talks for repairs by the city of Brookhaven and residents of Oak Hill Drive.

Brookhaven aldermen are offering to take care of a big road problem in a subdivision suing them over road problems, but only if residents there ask for help.

The city board on Tuesday voted to send a letter to the Oak Hill Homeowners Association laying out several options for repair to a failed drainage ditch threatening to erode and sever Oak Hill Drive, offering to roll in city crews and equipment to take care of the problem if residents make a formal request. Oak Hill residents are currently in court against Brookhaven, seeking to have all their roads declared public and be maintained by the city, so aldermen were careful not to make any moves that could be seen as taking ownership of the problem.

“With their permission, we will do what they allow us to do,” said Ward 6 Alderman Shelley Harrigill. “If it’s an issue of public danger, we want to help. If it were a city street, we’d do it right away. It’s a road the public utilizes, but it’s not a public road.”

The subdivision’s case against the city is ongoing in Walthall County court. The HOA is arguing its roads are public by prescription, citing the 2006 case Robinson vs. Lincoln County Board of Supervisors in which supervisors successfully added a road to the public register over a landowner’s protests because the county had previously performed maintenance on the road.

Oak Hill is asking 4th District Judge Wayne Smith to declare all its roads public for the same reason — the city has done random maintenance and patching on Oak Hill Drive over the years, including a $27,000 overlay in 2011. Supervisors also listed it on Lincoln County’s public road registry in 2003, prior to the city claiming the area in its 2007 annexation, and the HOA is pointing out the roads have always been open to public use for school buses, garbage trucks, mail carriers and other services.

But the City of Brookhaven is arguing the roads remain private property and were never properly dedicated to the county prior to the annexation. The city is unwilling to accept ownership of roads not built to certain standards and wants Oak Hill to repair and upgrade its road system before considering making the roads public.

The battle between Oak Hill and Brookhaven has been fought for a couple of years now, but heavy rains last weekend caused rapid deterioration of the Oak Hill Drive spillway, leading to urgent letters for help to the city and county and the Mississippi Department of Environmental Quality’s Dam Safety department.

Beck Warren, an original Oak Hill HOA member, said the damage to the spillway transcends the fight over road ownership and requires a response from the city under a state law allowing county supervisors to work on public or private land when danger is present. He said the HOA was advised to report to its “immediate jurisdiction” — the City of Brookhaven — even though the law identifies county supervisors.

“After consulting with various state agencies, we were instructed we should contact our local officials about what has turned into a serious public health, safety and welfare issue,” Warren said. “Our expectations is for (the city) as the governing entity is to do what they do.”

Warren would not comment on the legal battle between his HOA and the city.