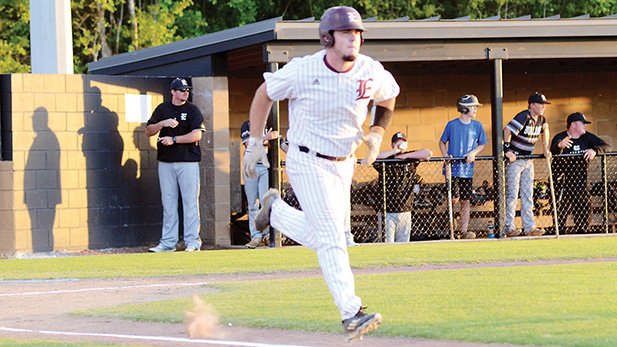 Photo by Collin Brister Hunter Richardson jogs toward first after a hard hit in an earlier game.

Enterprise head baseball coach Cass Brister said the series win over Enterprise-Clarke was one of the best baseball series he’s ever been a part of.

The numbers agree with him, as the Yellow Jackets won two one-run contests against the Bulldogs to advance to the third round of the playoffs against Perry Central.

“That series was really great baseball, and I kind of hated that someone had to lose it,” Brister said. “We both pitched it really well, and we were able to get two hard-earned victories to move on.”

The Yellow Jackets were led on Friday night by ace-pitcher Landon Gartman who threw eight innings of scoreless baseball, striking out 15 and only surrendering two hits in the contest.

“Landon told me in the sixth inning that if we could just get him a run that we’d win, and he backed that up,” Brister said. “He was dominant in that game. He kept his pitch count down, but he also had 15 strikeouts.”

Gartman and sophomore Austin Fugler have been the key cogs on the mound for the Yellow Jackets. Both are undefeated in the playoffs.

“Landon throws hard, but the thing about him is he can locate it,” Brister said. “When you think of guys in high school that throw that hard you wonder about their ability to throw strikes. He’s a pitcher though. He can throw three pitches into the strike zone, and when you throw in the mid 80’s that’s tough to hit.

“Fugler has been great for us, and he was great again on Saturday,” Brister continued. “We have a lot of confidence when he takes the mound, and he’s pitched us out of some jams when we’ve made some mistakes.”

Brister said the team plays with a lot of confidence with Gartman and Fugler on the mound because they know they’re going to get a solid performance out of both of them.

At the plate the Yellow Jackets are led by Hunter Richardson, who’s hitting over .400 on the season.

Brister said the offense is surrounded with young players, and while they make some mistakes at times, he’s proud of the way they’re hitting the baseball.

“We just find a way,” Brister said. “We’re not the flashiest team on the offensive end, but we’re good enough. We’re relentless, and that’s a key to being successful this time of year.”

Enterprise will travel to Perry Central Thursday night to start the third round of the playoffs. They’ll return home Friday night, and an if-necessary third game will be back at Perry Central Saturday night.

“They’re a relentless team on offense and on the mound,” Brister said. “They throw strikes. They’re not going to wow you, but they’re very fundamentally sound. “