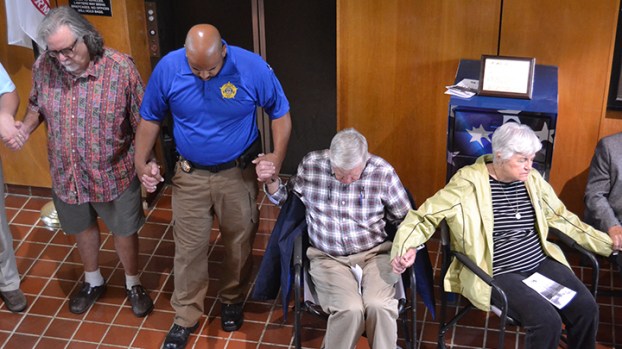 File photo/Lincoln Countians join hands to pray for the nation in 2017 at the annual Day of Prayer event at the Brookhaven-Lincoln County Government Complex. This year’s event is Thursday at noon in the same location. King’s Daughters Medical Center will also host a prayer event outside the radiology outpatient entrance at 7:15 a.m.

Lincoln County to come together to pray for nation

Two events scheduled in Brookhaven Thursday will give residents and workers an opportunity to gather together to pray for each other and the nation.

King’s Daughters Medical Center will hold a prayer and reception outside the radiology outpatient entrance beginning at 7:15 a.m.

The event, hosted by the KDMC prayer committee, will feature Dr. Richard Rushing offering the opening prayer and Dr. Steve Mills, who will be the speaker.

Music will be provided by Heather McKenzie and refreshments will be served.

In case of inclement weather, the ceremony will be moved inside to the hospital lobby.

Inclement weather will move the ceremony into the courthouse lobby.

Both programs are expected to last 30 to 45 minutes.

The National Day of Prayer is an annual observance held on the first Thursday of May, inviting people of all faiths to pray for the nation. It was created in 1952 by a joint resolution of the United States Congress, and signed into law by President Harry S. Truman.

Maxine Dillon is on tap to sing at the courthouse event, “Praying for the Seven Centers of Influence in America,” said Rev. Steve Jackson, missions director for the Lincoln Baptist Association.

The pledge of allegiance will be led by World War II veterans with Rev. Nick Wolfe from First Baptist Church Brookhaven singing the national anthem.

Prayers will be said aloud for the seven centers of influence: government, military, media, businesses, schools, churches and families.

“We all have different likes and dislikes. We all come from different perspectives and backgrounds. We can all find a oneness in our love for Jesus,” Jackson said.

A second Neighborhood Watch meeting will be Thursday to get interested groups up and running. Cpl. Robbie Fields is facilitating... read more