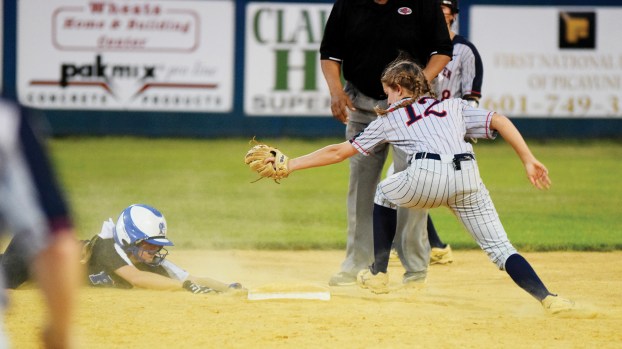 Photo courtesy of The Picayune Item/Brookhaven’s Kat Wallace tags out a PRC runner during game three of the state quarterfinals Tuesday night in Carriere.

With the series win, the Lady Devils (24-4) secured a trip to the Class 5A South State Championship Series.

“This was a series between two really good teams and it’s a shame that one of us had to lose tonight,” PRC head softball coach Tony LaBella said.

In the first game of the day, two homeruns by Shelby Archer gave PRC a 2-1 victory and forced the series to a deciding game three.

Archer hit her first homerun of the game during the bottom of the second inning. Later in the game, in the top of the sixth, Brookhaven’s Kat Wallace tied the game via an RBI by Haley Nations. In the bottom of the sixth, after PRC’s Madison Gower struck out at plate, Archer hit a homerun into center field, which gave the Lady Devils a 2-1 lead. Game two came to an end when PRC’s pitcher Jade Latham struck out two batters and a tag-out at first base.

Jade Latham pitched the entire game for the Lady Devils, during which she allowed four hits and struck out seven batters.

“Archer has been such a good player for us during the last five years,” LaBella said. “In addition to her two homeruns, her defense at shortstop was phenomenal tonight as well. Sometimes her name doesn’t show up on the stats but her work on defense is outstanding.”

In game three of the series, the game remained scoreless until Brookhaven’s Layla Woodall gave the team a 1-0 lead in top of the fourth inning.

In the bottom of the fourth, Archer took advantage of an error by Brookhaven and scored the tying run for the Lady Devils.

Moments later, Gower made her way to home plate and gave PRC a 2-1 lead. With Alahna Lee on base and only one out in the inning, Keigan Pearson hit a two-run homerun to left center field. The Lady Devils led 4-1 after four innings.

During the top of the fifth, Wallace scored for Brookhaven but Jadeyn Fuller was tagged out while attempting to steal second, which brought the inning to an end.

A wild pitch in the bottom of the fifth permitted Archer and Gower to reach home plate and give PRC a 6-2 lead through five innings of actions.

An RBI by Rileigh Allen allowed Kyja Williams to score Brookhaven’s third run of the game in the top of the seventh. The game came to an end when a pop-up was caught in left field by Kauzlarich.

In game three of the series, Pearson went 2-for-2 with a homerun and two RBIs, Gower was 2-for-3 and Maddi Glidewell went 1-for-3. Latham pitched all seven innings and allowed nine hits and struck out two batters.

“During the season, I try to avoid letting our pitchers go the distance, but Latham was in a groove tonight,” LaBella said. “She was a warrior and she wanted the ball every single time.”

Co-Lin Lady Wolves out in first round