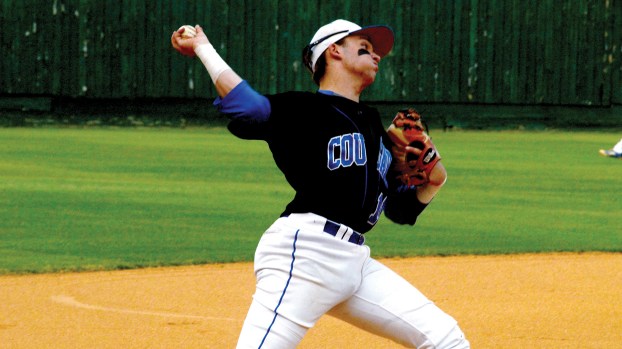 Photo by Collin Brister/BA third baseman Brady Spring throws across the infield in a game earlier this season.

Brookhaven Academy wasted no time on Tuesday night jumping on Amite School Center, as the Cougars put up four runs in the first inning.

The drubbing only continued, as the Cougars pounded out 10 more runs to win game one of the best-of-three series 14-3.

The Cougars were led at the plate by Tucker Watts and O’Neil Burgos, both of which hit homeruns in the contest.

Burgos went 3-5, and Watts went 2-5 with a double and a homerun in the contest.

The Cougars were led on the mound by Tanner Watts who threw five innings, giving up two earned runs and only surrendering four hits in the contest.

Taylor Freeny and Dawson Flowers each threw shutout innings to finish the contest. Flowers and Freeny each struck out one hitter  over their inning.

The Cougars will return home tonight at 5 p.m. to take on Amite School Center. If a game three is needed, it’ll be played immediately afterwards.

Enterprise heads to Perry Central for third round

After winning what Cass Brister said was one of the best high school baseball series he’s ever been a part of against Enterprise-Clarke, the Yellow Jackets will head down to Perry Central Thursday night to start their third-round series.

The Bulldogs come into the matchup with the Yellow Jackets with a 19-7 record, and they went perfect within their district play.

Perry Central has gone undefeated through the first two rounds of the playoffs. They run-ruled Bay Springs in two games in the first round, and soundly defeated the Mize Bulldogs in the second round.

Perry Central is led on the mound by senior Brantley Pipkins, who’s thrown 47.2 innings on the season and struck out 50 hitters over that time. Pipkins has only allowed four earned-runs over the course of the season and has a .59 ERA for the year.

Noah Hillman will likely take the ball in game two for the Bulldogs when they head to Enterprise Saturday night. Hillman has thrown 38.2 innings on the season and struck out 28 on the year, while only walking 14 hitters.

The Bulldogs are led at the plate by senior Jesse Meeler. He’s hitting .435 for the year, and he leads the Bulldogs in hits, doubles, triples and homeruns.

Derrick Hartfield comes into the series hitting .381 on the season. He has four doubles, two triples and three homeruns.

The Bulldogs have won six of their last seven contests heading into the series.

Pearl River Central’s softball team won 2-1 and 6-3 in games two and three of the state quarterfinals series against... read more