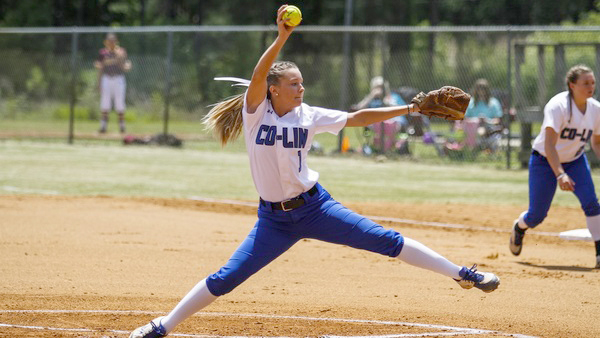 Co-Lin Lady Wolves out in first round

“I’m really proud of these girls,” said sixteenth-year head coach Allen Kent. “We had a very good season in the toughest region in all of NJCAA softball…we had great leadership all year long from our sophomores.”

The Lady Wolves had the lead late in game one, but the Lady Wildcats came roaring back in the final two frames to take the contest.

PRCC got the scoring started in the top of the first with an RBI double that plated two runs, but Co-Lin scratched one across in the bottom half of the frame off an RBI single from Julie Scheuermann.

In the bottom of the second, the Lady Wolves tied that game at two-all after Paige Hulin drove in Alexsundria Thomas with a double.

The Lady Wildcats got one in on a single in the fifth to regain the lead, but once again Co-Lin struck back in the bottom half. Tori Pettit hit a line drive to left that scored both Alex Anthony and Bailey Root giving Co-Lin a 4-3 lead.

PRCC pushed three more across in the sixth to take the lead and continued the back-and-forth nature of the game. Going into the bottom of the sixth the Lady Wildcats were up 6-4.

Abigail Thornton drove one in for the Lady Wolves in the sixth, but a solo homer and three RBI single gave the Lady Wildcats an 11-5 lead in the seventh, securing the victory.

Blacker earned the victory in the circle for Pearl River. She allowed one hit and one run over two and a third innings, walking one.

Bailey Root took the loss for the Lady Wolves. She allowed nine hits and six runs over five innings, striking out one.

Hulin went 2-for-3 at the plate to lead Co-Lin at the dish.

“We just didn’t have a good game,” said Kent. “We left some balls over the middle of the plate, we kicked it around on defense and they took advantage of the opportunities we gave them”

The Lady Wolves’ season came to a heartbreaking end on Saturday with a walk-off grand slam from PRCC in the eighth inning as the Lady Wildcats played as the home team.

PRCC was first on the scoreboard with an RBI double in the bottom of the first.

Bailey Root knotted the game in the top of the third with an RBI single that scored Abigail Thornton. Thornton led off the inning with a single.

The Lady Wildcats recaptured the lead, 2-1, in the bottom of the third with an RBI single.

The Lady Wolves got back on top in the top of the sixth, 3-2, after an error scored Tori Pettit and an RBI single from Taylor Bryant plated Julie Scheuermann.

PRCC tied the game once again in the bottom of the sixth with yet another RBI single.

That score held until PRCC walked it off with a grand slam from Jada Walker in the bottom of the eighth to give the Lady Wildcats the win.

Rylee Swilley took the win for Pearl River Community College. She went three innings, allowing zero runs on one hit, striking out two and walking one.

Bailey Root suffered the loss for Co-Lin. She surrendered five runs on nine hits over three and a third innings, striking out one.

Mackenzie Gros started the game for the Lady Wolves. She gave up eight hits and two runs over four innings, walking one.

“It was a great game, we played really good defense, as did they,” said Kent. “We got out of several jams all game, but in the end they got some big hits and we didn’t.”

Brookhaven is out of the playoffs, falling 6-3 in the deciding game of the series Tuesday night. Pearl River Central... read more