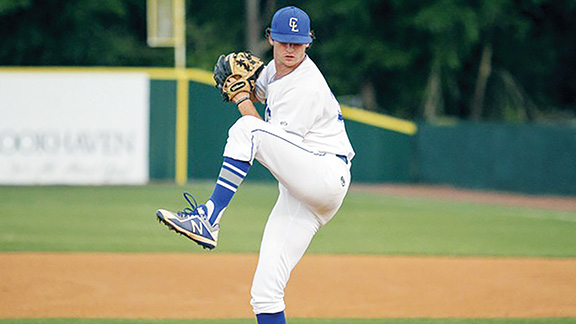 Photo by Co-Lin Athletics Information/Sophomore pitcher Kyle Whittington took the loss for the Wolves against the Pearl River Wildcats Wednesday.

The Wolves of Copiah-Lincoln Community College dropped a pair of MACJC contests on Wednesday to the No. 7 ranked Pearl River Community College Wildcats. The losses move Co-Lin to 19-20 on the year, 8-18 in division play, and eliminate the Wolves from playoff possibilities. PRCC improved to 35-9, 21-5. Co-Lin is on the road today as the Wolves travel to Moorhead to close out the 2018 season with a doubleheader against Mississippi Delta.

The Wolves led midway through the fifth inning, but the Wildcats pulled away late in the 8-3 victory.

Co-Lin took the lead in the top of the third when an error scored one and Chandler Dillard drew a bases-loaded walk.

The Wildcats cut the Wolves’ two-run lead in half in the bottom of the fourth frame with a sacrifice fly, but a leadoff solo home run from Austin Tidwell in the top of the fifth stretched the lead back to two, 3-1.

PRCC tied the game in the bottom of the same inning after an RBI triple.

The Wolves went three-up-three-down in the sixth and the Wildcats took advantage of that momentum in the plated four off an RBI single, a two-run homer, and an error. They also pushed across one more in the eighth for a final score of 8-3.

Tidwell took the loss for the Wolves on the hill as he allowed three hits and five runs over five innings, striking out eight, but the freshman also led the team at the plate with two hits in four at bats.

Camden Dusang earned the victory for PRCC. He allowed five hits and three runs over nine innings, striking out ten.

The Wildcats took an early lead in the nightcap and never looked back as PRCC secured the win.

PRCC got the scoring started in the bottom of the second with a pair of RBI singles and a grand slam from S Landry to jump out to a 7-0 lead.

The Wildcats added another two runs in the bottom of the third with an RBI double and a passed ball.

Co-Lin clawed back in the top of the seventh with Tyler Etheridge being hit by a pitch with the bases loaded, an error that scored two, and an RBI single from Austin O’Flynn. The runs brought the Wolves within five, but Co-Lin could not narrow the gap as PRCC won 9-4.

Kyle Whittington took the loss on the bump for Co-Lin. He went one and two-thirds innings, allowing four runs on one hit and striking out one.

Dillard, Jaylynn Williams, O’Flynn, and Zach Pope each managed one hit to lead Co-Lin at the plate. Defensively, the Wolves played well and did not commit a single error in the field.

Miles Smith earned the win for PRCC. He surrendered zero runs on three hits over five innings, striking out nine and walking zero. A number of pitchers entered the game in relief, with Luke Bradley, Dylan Usry, Deyton Lingle, and Preston Krummel all securing outs and ultimately the victory.