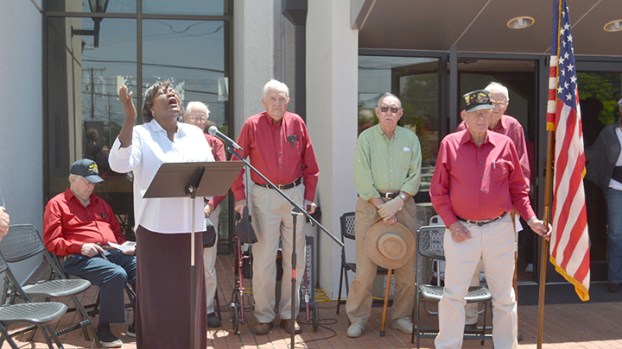 The Son shined bright on the steps of the Lincoln County/Brookhaven Government Complex Thursday for the annual National Day of Prayer.

“God has said prayer works and we need to practice it,” said Rev. Steve Jackson, director of missions for the Lincoln Baptist Association.

Though Jackson has organized the prayer service for the past seven years, he makes sure it’s a non-denominational event open to all.

He keeps it to a 40-minute service, with speakers praying for just a minute or two on their assigned subject.

The government is one of the seven centers of influence in America, Jackson said. Focused prayers were also offered for the remaining six:

The event was held outside, though it was cooler and less bright inside the courthouse, but it was fitting that prayers for Lincoln County were said aloud under a blue, nearly-cloudless sky and were witnessed by drivers on South First Street and people entering and exiting the courthouse doors.

“It’s significant that we live in a land that we can do this in,” Jackson said. “This is a visible witness to cars passing by.”

He said that prayers offered on a national day are good, “but prayers are supposed to be 365, not just one day.”

Jackson encouraged those attending the event to pray for the seven centers and to choose individuals that they know to represent each one.

The event was hosted by the KDMC prayer committee. Dr. Steve Mills was the featured speaker.

The National Day of Prayer is an annual observance held on the first Thursday of May, inviting people of all faiths to pray for the nation. It was created in 1952 by a joint resolution of the United States Congress, and signed into law by President Harry S. Truman.

A Madison County jury on Thursday convicted a Brookhaven man for the second-degree murder of his mother’s fiancé. Bruce Douglas... read more