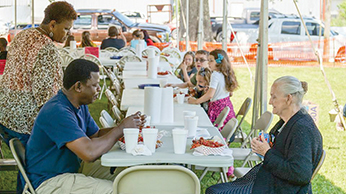 File photo The members of Brookhaven First Assembly open their church each year for a community appreciation lunch. The event will be Sunday from 10:30 a.m. to 12:30 p.m.

The members of Brookhaven First Assembly are skipping the mudbugs this year, but not the party.

For nearly a dozen years, the church on North Second Street has served crawfish at its annual community appreciation lunch. This year they’re smoking 24 Boston butts for pulled pork sandwiches.

“This year we’ve changed it up,” said Cookie Wallace, the office manager at the church.

They’ll also have a hot dog table with all the fixings, jambalaya and baked beans and “all that good stuff,” she said.

The Brookhaven Police Department blocks off East Congress between the church and the lot it owns across the street. Several games will be available to children and teens, like basketball and gaga ball. They’ll also have a variety of inflatables set up.

Wallace said they don’t cancel their church service, but rather move it outside to minister to people in a non-traditional way.

“All our ministering to people will be done one-on-one,” she said. “We’re not trying to take anyone away from their own churches. And it doesn’t matter what church you go to or if you go.”

She said they open their doors to anyone and this community lunch gives people who might not have a church home a chance to talk to First Assembly folks, who represent a variety of races and denominations.

“We just all love each other and we want everybody to experience the love of God,” she said. “We want them to know that their lives matter. They are a child of God and he loves them and so do we.”

Wallace said the event draws crowds of around 500 each year.

Everything is free at the lunch — the food, the fun and the fellowship. No one is under any obligation to join the church, she said.

“This is an appreciation day. If they just want to come eat, that’s fine, too. That’s what the food is there for,” Wallace said.

She said a side bonus of the event is the church members have grown closer together through the planning and production of the lunch.

Christian comedian Lee McBride is on tap to entertain at the lunch.

A Brookhaven man who pleaded guilty to possession of child pornography is among the cases heard this week in Lincoln... read more