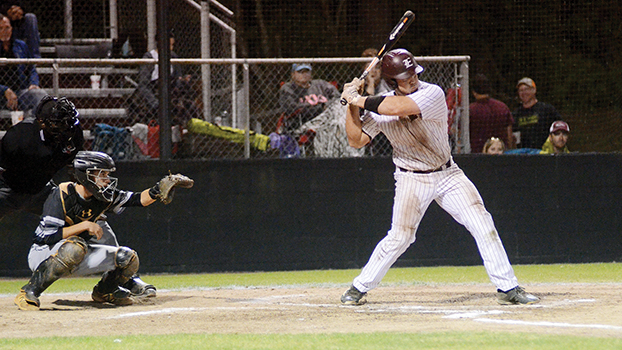 Photo by Collin Brister Enterprise junior Hunter Richardson tightens up just before tagging a ball high and long in a game earlier this season. Richardson brought in a two-out RBI-double in the top of the first Thursday night.

The Yellow Jackets couldn’t overcome a six-run fifth inning from Perry Central on Friday night as the Bulldogs won 10-6 to clinch the series 2-0 over Enterprise.

Perry Central scored two runs in the top of the fourth, and then exploded in the next inning to put the game in the ice.

Enterprise finished the regular season with a 18-8 record and a 9-3 mark in their district.

Enterprise struck first Thursday night against Perry Central, but the Bulldogs scored four runs in the first two innings and held on for the 4-3 victory in the first game of the third round of the playoffs.

After Austin Fugler reached base in the top of the first inning and was bunted to second base, Hunter Richardson brought him in with a two-out RBI-double to give the Yellow Jackets an early 1-0 lead.

Perry Central responded in the bottom of the first inning. With two outs and two runners in scoring position, the Bulldogs got two-RBI single to put them back in front going into the top of the second inning.

Perry Central put up two more runs in the bottom of the second inning. After an error allowed one runner to score, the Bulldogs got a RBI-single to plate their final run of the contest and go up 4-3 going to the top of the third inning.

The Yellow Jackets would answer those two runs in the top of the third inning as they loaded the bases with one out. Colby Bear smacked a two-out RBI single to the outfield and Enterprise would cut the lead to 4-3 with two runners still in scoring position.

In the biggest play of the night, Perry Central got out of the jam with a double play on the next hitter, and the Bulldogs still had a 4-3 lead in the contest.

The game became a pitcher’s duel at that point between starting pitchers Landon Gartman and Brantley Pipkins.

Gartman would only surrender one hit after the bottom of the second inning, and Pipkins would keep the Yellow Jackets off the scoreboard until he turned the ball over to Noah Hillman with two outs in the sixth inning.

With two-outs and two-on, Hillman was able to coax a line drive to left field to escape the jam 4-3.

Enterprise would threaten in the top of the seventh inning, as they put two runners on against Hillman, but he, again, was able to wiggle out of the jam and the Bulldogs came away with a game-one victory.

Gartman was dominant in the contest for the Yellow Jackets, throwing a complete game and striking out 16 Bulldogs in only 13 pitches.

At the plate, the Yellow Jackets were led by Beard and Richardson, both having RBI base-hits in the contest.

Lawrence County will travel to Newton County tonight for game one of the South State championship, with the winner moving... read more