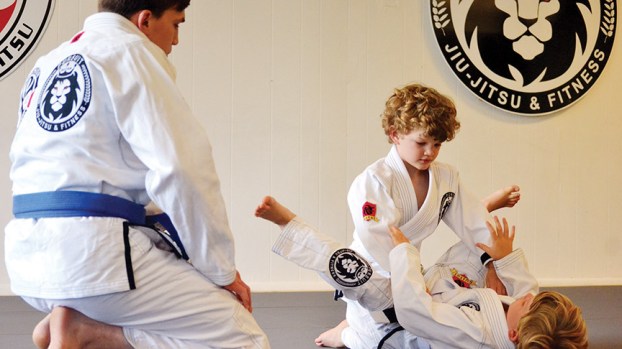 Photo by Donna Campbell/Brazilian jiu-jitsu instructor Erik Medlin works on techniques with two of his three sons — the middle child Elijah, on his knees; and Jameson, the eldest, on his back.

A jiu-jitsu studio could be one of the last places an individual would expect to meet Jesus. But owners Erik and Jessie Altman Medlin hope that’s the case every day they’re open.

The couple doesn’t run a Christian business. Their business is run by Christians, they say. And because of that, everything they do is done for God.

“We knew we wanted the business to be a ministry,” Jessie Medlin said. But they didn’t want it to be an over-the-top, in-your-face ministry. They take more of a laid-back, be-yourself type of approach.

“Some people will ask about it,” Erik Medlin said.

They call their business Pursuit Jiu-Jitsu and Fitness, based on Revelation 19:16, which says “On his robe and on his thigh he has this name written: King of kings and Lord of lords.” Their business logo is painted on the wall in the studio — it’s the head of a lion wearing a crown.

The name — Pursuit — is an action close to the Medlins’ hearts.

The Medlins moved to Brookhaven from Denham Springs in October for Erik Medlin to take a job as youth pastor and education director at Southway Baptist Church. In Louisiana, he worked at Excelsior Jiu-Jitsu as a coach and fitness trainer. Jessie Medlin is a Brookhaven Academy alumnus.

The couple, married seven years in August, has three sons — Jameson, 5; Elijah, 4; and Liam, 2. The two older boys take classes from their dad. He said jiu-jitsu is good for young children because it teaches them discipline. For children 4 to 7 years old, Medlin focuses on one technique and adds more principles for older students. Adults can learn two to three techniques at each lesson.

Students sometimes come to the Medlins for more than just techniques. They also ask for encouragement and advice. Erik said students routinely talk to him about problems before and after class and often share prayer requests.

“We’re able to meet the needs of family in a non-traditional way,” he said.

Part of Erik’s satisfaction as an instructor is to be there when his students learn a new technique and he gets to see them become more confident.

The Medlins offer monthly memberships and most people come once or twice a week. Some work out right beside their children.

A Brookhaven woman was hospitalized after ramming her car into the back of a house in Wesson Saturday.  The same... read more