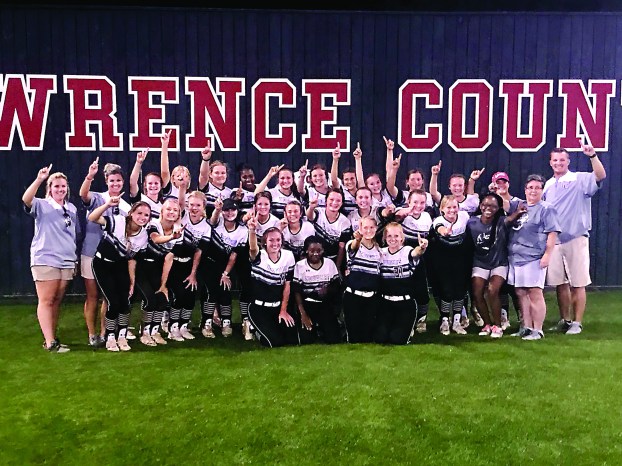 Lawrence County softball coach Meleah Howard’s father told her when she took over as the softball coach that when the current seventh graders were seniors, she’d have her best season.

They did it because senior Josey Nations, who threw 279 pitches over the two games on Monday night, was dominant in game three. She didn’t give up an earned run in regulation in winner-take-all game three.

“I was able to throw my off-speed into the zone consistently,” Nations said. “I thought that was big for me. I’m proud that we were able to win the South-State championship.”

They did it because in the bottom of the eighth inning with two-outs and a runner on third down 2-1, the Cougars had to have a hit from Tyranesha Davis to extend the game. The senior belted a ball through the right side to tie the game.

“That was such a clutch at-bat that may get overlooked because of everything else,” Howard said. “That’s another senior coming through, with two strikes and the season on the line, when we had to have her.”

They did it because sophomore Raylee Ready caught a missile at third base in the top of the 10th inning that, if it gets by her, brings in three runs and likely leads to a Newton County victory.

They did it because they didn’t panic or quit or give up or freak out when things got tough.

“We just tried to stay confident throughout the game,” Howard said. “It’s easy to get down and get negative, but we stayed positive throughout both games.”

Nations dominated Newton County for the first five innings of game three, not letting a runner get to third base and striking out seven.

The problem was that Newton County was dominating in the circle as well, not giving the Cougars any chances to put runs across the plate.

Newton County would score in the top of the sixth inning with a two-out single into right field to take a 1-0 lead to the bottom of the sixth.

They did just that.

Sophomore Sydney Peavey led off the inning with a single to give the Cougars a chance.

That’s when Howard had a decision to make. She could bunt Peavey to second base and give up one of her final three outs to put a runner in scoring position, or she could let Skyler Speights swing the bat.

She chose the latter, and Speights delivered with a single to right field with Peavey advancing to third-base on the play.  Junior Julianna Johnson would drive in Peavey one hitter later to tie the game at one and send the game to extras.

After each team scored one run in the eighth and ninth innings to have the game tied at three in the 10th-inning, Nations had a chance to put up a zero on the scoreboard and let her team hit with a chance to score the game-winning run and send the Cougars to Hattiesburg on Thursday for the state championship series against Kosciusko.

With the bases loaded, two outs, and a 3-2 count, Nations coaxed a line drive right at Ready who snow-coned it for the third out of the inning.

“I saw it off the bat, and then it was in my glove,” Ready said of the snow-cone catch that held Newton County off the scoreboard in extra innings. “I looked in there, and I had caught it.”

All the Cougars had to do then was score Maddux Kirkland from second base to win the series in the bottom of the 10th. Kirkland advanced to third on the first pitch of the 10th inning on a wild pitch, setting up Abbie Errington with a chance to be a hero.

“I wanted to be the person up there to drive in the winning run,” Errington said. “I got a pitch I could do something with, and got the hit.”

She delivered with a single through the left side that sent Kirkland racing towards the plate and into the Cougars’ first state championship appearance in program history.

Lawrence County will travel to The University of Southern Mississippi on Thursday to take on the Whippets in a best-of-three series with the first game at 4 p.m.

“I’m proud of the girls,” Howard said. “To win the South-State championship for the first time here is a big accomplishment. But there’s more work to be done, and we’ll get started on that on Tuesday.”