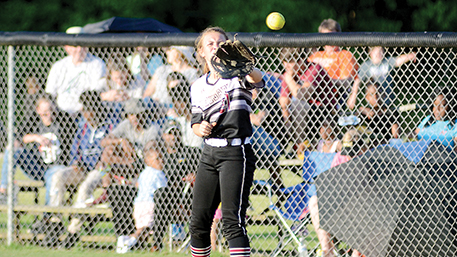 Photo by Collin Brister/Alyssa Lambert catches a ball for an out in Lawrence County’s series against Newton County.

How will Lawrence County fare against Kosciusko in the softball state championship? What about Brookhaven Academy in the MAIS south state baseball championship against Centreville Academy?

The two teams will travel to Hattiesburg on Thursday afternoon to play in game one of the state championship best-of-three series.

The Whippets are 29-4 on the season and they went a perfect 8-0 in the district.

Kosciusko dropped their first game of their first two playoff series to Mooreville and Tishomingo County, but they rebounded and won game three in both series to continue to advance.

The Lady Cougars have dominated the playoffs as well, putting Northeast Jones out in three games and disposing of Vancleave in two game before winning the South State championship in three games.

The Cougars are led on the mound by Josey Nations, who’s thrown every pitch of the playoffs for Lawrence County.

The Whippets are led on the mound by Katie Mitchell and Maddy Gilmore.

Mitchell has thrown 107 innings for the Whippets this season, while Gilmore has thrown 72.1 innings over the year.

Mitchell comes into the series with a .92 ERA, and Gilmore boasts almost as impressive of an ERA at 1.06.

When two teams as talented as Kosciusko and Lawrence County play, it’s hard for either of them to win the series in two games.

Both teams have shown a propensity to play three games in a series, and that continues here.

Both teams won their opening playoff series fairly comfortably, with neither team needing a game three to dispatch their opponents.

The Tigers and Cougars played once in February, with Centreville coming out with a 4-2 victory, but both teams were without a plethora of basketball players that are now with the team.

Brookhaven Academy has pitched it extremely well as of late, and they’re riding the arms of Caston Thompson and Tanner Watts to continue to give them good outings throughout the playoffs.

The Cougars have a myriad of options in Taylor Freeny, Nick Ogden and Dawson Flowers behind those two starters to provide relief or shutdown games.

With Brookhaven Academy having home-field advantage in the contest, it would behoove them to take game one of the series to put all the pressure on Centreville on Thursday night.

The Cougars are playing somme of their best baseball as of late, and that carries over into the South State Championship.

It could have been easy for Lawrence County to panic on Monday night when the Cougars fell down 1-0 in... read more