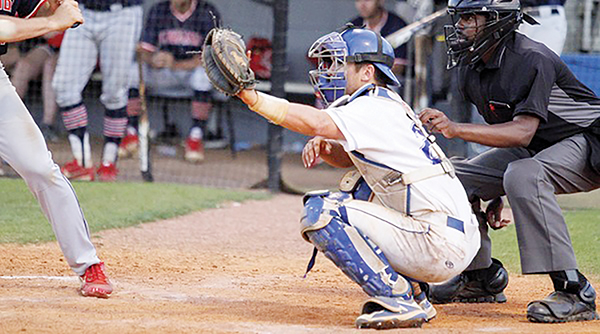 Photo by Co-Lin Athletics Information/Co-Lin freshman catcher Will Clark readies for a pitch during the weekend double-header with Mississippi Delta Community College.

The Copiah-Lincoln Community College Wolves finished the 2018 regular season with a split against the Trojans of Mississippi Delta Community College. The 6-5 loss and 11-1 victory in the nightcap gave the Wolves a 20-21 overall record and moved Co-Lin to 9-19 in MACJC play.

The Trojans took an early lead in game one on Friday after a passed ball and an error allowed two runs to score in the bottom of the second, but the Wolves struck back in the top of third. Mark Hubbard knotted the game up with an RBI single that plated Austin O’Flynn and Thomas Slagle.

The Wolves took the lead later in the contest with a base-clearing triple from Craig Bradley. The line drive to center field scored Hubbard and Chandler Dillard who reached base on back-to-back singles earlier in the fifth.

Delta scrapped back and pushed one across in the bottom of the sixth to cut the Wolves’ lead to 4-3.

Co-Lin scored their final run of the game in the top of the seventh after an error allowed Zach Pope to score from second, stretching the Wolves’ lead to 5-3.

Christian Day was on the mound for the Wolves. He went seven innings, allowing five runs on seven hits, striking out four and walking zero.

Co-Lin tallied 16 hits in the game with Dillard, Slagle, Hubbard, O’Flynn, and Bradley each collected multiple hits. Dillard went 4-for-5 at the plate to lead Co-Lin.

Game two was all Co-Lin as the Wolves racked up 14 hits to Delta’s four. The Wolves were also perfect in the field with no errors.

The scoring started in the top of third as the Wolves poured in six runs. Austin Tidwell drove in Will Clark with a double and Zach Pope scored on a wild pitch to score the first two runs. Mark Hubbard drove in Austin O’Flynn with an RBI single, Pope was hit by a pitch with the bases loaded, and Clark drew a bases loaded walk to give Co-Lin an early 6-0 lead.

A solo homer from Bradley to lead off the fifth and a sac from Tidwell stretched the Wolves to 8-0 later in the game.

Bradley roped an RBI single in the sixth and Thomas Slagle took advantage of a passed ball to grow that lead to 10-0. Delta scored their lone run in the bottom half of the frame with an RBI single.

Hubbard plated Co-Lin’s final run in the top of the seventh with an RBI single.

Conner Ingram got the win for the Wolves on the mound. He lasted four and two-thirds innings, allowing one hit and one run while striking out two.

Hubbard led the way at the dish with three hits in five at-bats.