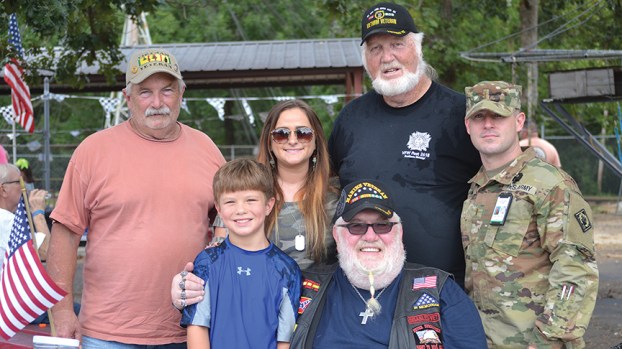 Lincoln Countians will have a chance to honor fallen veterans Wednesday as the Vietnam Traveling Memorial Wall makes its way along Hwy. 84 and up I-55, headed to the Trail of Honor in Jackson.

It will be displayed at the Harley-Davidson of Jackson dealership from May 17-21.

The truck carrying the wall — a three-fifths scale of the Vietnam Memorial in Washington, D.C. — will be escorted from the south gate of Camp Shelby to Jackson by way of Brookhaven. It’s the first time the wall will make this route, said Derrall Foster, a Vietnam vet and a volunteer with the Trail of Honor.

The public is asked to come out and show their patriotism by waving flags as the wall passes.

Foster suggests lining the road near Reed’s Metals. He said parking at the gas station is discouraged so the caravan can stop and refuel.

He expects around 150 to 200 motorcycles to participate in the caravan.

They plan to be at the gas station for about 30 to 45 minutes. They’ll continue along Hwy. 84 to I-55, then head north to Jackson.

Mississippi Highway Patrol and local law enforcement officers will also be participating in the escort, he said.

The Vietnam Traveling Memorial Wall will be located on the Trail of Honor and open 24 hours a day until the event ends Monday.

Each May, Harley-Davidson of Jackson is closed to normal business and transforms to host the Trail of Honor. Foster describes it as a living history demonstration event like no other.

“It’s a tribute to veterans, that’s true enough,” he said. “Veterans like myself, doing this for the public, we’re trying to get younger people who don’t have history anymore. This is a live history lesson for the people, to show them what it was about, to get what we have today, to be free.”

The Trail of Honor began in 2003 as a way to welcome the “Run for the Wall” motorcycle riders and to honor veterans. It started as a pit stop on the run with a single Civil War cannon and has become a three-day event staffed by more then 300 living historians and volunteers. In 2015 the Trail Of Honor attracted more than 35,000 visitors.

The Trail of Honor features historically accurate demonstrations of military life in a walking trail through history. From the French and Indian War, to the current operations in Iraq and Afghanistan, the Trail of Honor gives the public an insight into what service men and women endured while fighting for freedom, Foster said.

The free event includes battlefield re-enactments from the Civil War, World War II and Vietnam War and military armor and aerial displays. Historians will be on hand at encampments representing each American war. Active duty personnel representing each branch of the military will also attend.

The Commemorative Air Force will perform flyovers in war planes from the past including the B-25 and the T-6 warbirds. War planes will be on display at the Madison Bruce Campbell Airport CAF Hangar.

Admission and parking for The Trail of Honor is free, however, there is a fee for rides in CAF aircraft and a Huey helicopter.

Parking is available at the Mississippi State Fairgrounds and the Jackson Police Pistol Range with shuttles running every 15 minutes to the Harley dealership.

The opening ceremony for the Vietnam Traveling Memorial Wall is 11:30 a.m. Friday at the Harley dealership.

Several free spots for veterans are available in the golf tournament, which will begin with a shotgun start at 1 p.m. Thursday at the Canton Country Club. For any veteran who wants to play, call Dave Scott at 601-695-0218.