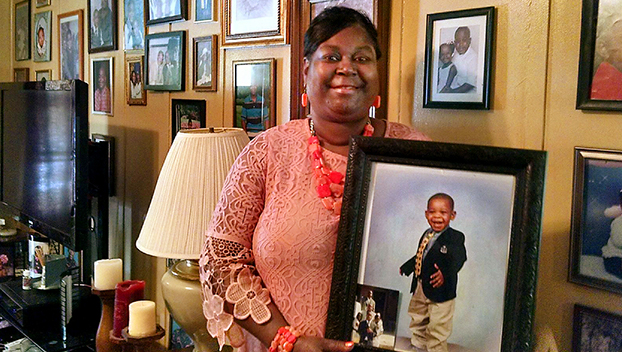 Marsha Young stands with a photo of her youngest son, JaMarlon, who graduated Friday night from the Natchez campus of Copiah-Lincoln Community College. JaMarlon is her youngest child, and when he soon leaves, she will have an empty home for the first time in 37 years. (Clara Turnage / The Natchez Democrat)

Mother’s memories: Woman celebrates many milestones in her children’s lives

NATCHEZ — Marsha Young’s home has been full of laughter, love and children for 37 years.

But Friday night, when her youngest son, JaMarlon, graduated from the Natchez campus of Copiah-Lincoln Community College and began readying to move to a senior college, Young realized she would have an empty nest for the first time.

This Mother’s Day, which is being celebrated today throughout the nation, Marsha Young is entering a new phase of motherhood.

Gone are the days when her children will patter across the floor on toddler’s toes or ride bikes around the neighborhood.

Her babies, she said, are growing up.

“I don’t know what it’s like to be without children here,” Young said in her house Saturday. Covering her walls were dozens and dozens of photos of her family. Baby pictures, graduation photos, nieces, nephews — hardly an inch of the wall was visible for the pictures.

“My whole life has been about raising my children,” she said. “The hardest part about being a mother is when you see them grow — and they grow so fast.”

Instead of being sad about their leaving, however, Marsha said she wants to celebrate all the memories her family has made and to start a new phase in her life.

Marsha said she knew who she wanted to marry when she crossed the stage at North Natchez High School graduation in 1978.

Just two weeks after her graduation, she married the love of her life, Eddie Young.

Two years after they married, Young had their first child, Eddie Jamon Young.

Marsha said when she began to worry about what motherhood would be like, she knew just who to turn to: her own mother, Martha Credit.

“I asked my mother, ‘What will it be like, having this baby?’” Marsha said. “She said to me, ‘It will be hard, but you will get through it.’ And she was right there, holding my hand the whole time.”

Raising her children, Young said, has been the great joy of her life.

Marsha herself had been raised among 10 siblings — five boys and five girls — and had grown up with a full and happy house, so she knew she wanted a big family.

Just two years after Eddie was born, Tavarus Young came along, and Marsha said her husband and family were still right by her side.

Those young years, she said, are precious and fleeting.

“If I had any advice to give young mothers, I’d say love your children,” she said. “They’re only here for a short while, and when they’re gone, they’re gone.”

Marsha said she feels lucky she got a second chance at the younger years. Her third son, JarMarlon, came along just when her eldest was ready to graduate high school.

“He has been an angel since the day he was born,” she said. “His older brothers adored him — everyone did. He is just spoiled rotten.”

The teenage years, Marsha said, are full of basketball and baseball and all kinds of things children get into.

And when your children are involved in something, she said, a mother must be, too.

“Get involved,” she said. “Get involved in what they’re doing. Don’t just send them; go with them.”

Being there, she said, whether coaching on the field like Eddie Young or cheering from the stands like Marsha, let children know someone cares about them, that their parents are proud of them.

Marsha said it is also a part of a mother’s duty to instill in their children certain values.

“No. 1, put God first in your life,” she said. “He will never leave you or forsake you — and you will need Him.

The only way to know your children learn those virtues, Marsha said, is if you tell them yourself.

Marsha said she does not know what to expect in this new phase of motherhood, but she is not worried.

“Our life has not always been perfect because we are not perfect,” she said. “But we have stayed together through it. God will not give you more than you can handle.”

She and Eddie Young, who Marsha said is still the love of her life, will have been together 40 years this year.

Her children are growing up and moving out and making their own lives, and Marsha said she is happy.

This, too, she said, is just part of being a mother.

“I just love them all so much and I’m so proud of them,” she said. “I have just been blessed.”

And, besides, now she gets to spend time with her six grandchildren, who live in the Jackson area with her two sons.