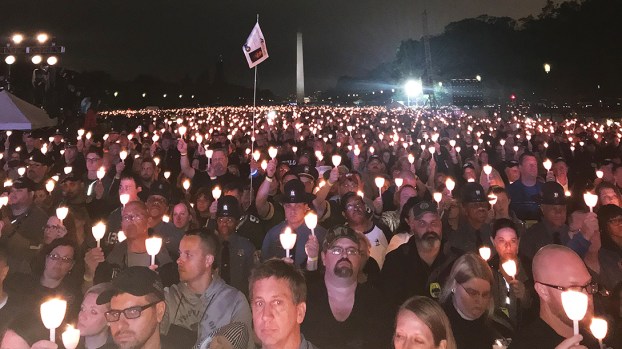 Photo submitted/Memorial for William Durr and other fallen officers in Washington, D.C.

The officer stepped to the podium in a dress uniform, his jacket square and tight across his chest, a campaign hat level on his head and straight as a steel blade. Under the white glow of the electric flood lamps, he slowly called out the names of the dead of Mississippi.

When he finished, a single bell tolled long and clean across the National Mall, its lonely music splitting the silence over the capital before fading away into the city beyond. Below, 30,000 candles flickered in memoriam.

It happened Sunday night at the 30th annual United by Light event, a candlelight vigil at the National Law Enforcement Officers Memorial in Washington, D.C., where the names of officers who fell in the line of duty are read aloud, remembered and respected ahead of their addition to the memorial just a couple of blocks north.

James Edward Clark was a Quitman County Sheriff’s deputy killed in August in a crash while responding to a call. Bobby Gene Spencer was chief of the Shannon Police Department when he was murdered in the department’s parking lot in 1997.

Donald William Durr was a Lincoln County man — the much-loved sheriff’s deputy was gunned down while trying to keep the peace on May 27, 2017, the first of eight to die in the worst mass shooting anyone can remember in Mississippi. Around 25 members of his family, friends and fellow officers were there Sunday night and will see his name added to the memorial this morning as part of National Police Week.

“It was an awesome experience — very humbling that they take the time to remember William like they did,” said Lincoln County Sheriff Steve Rushing, who is part of the local group in Washington.

Durr lost his life while responding to a domestic disturbance at 2871 Lee Drive in Bogue Chitto. Seven more people would die that night and into the following morning.

The accused shooter — Willie Cory Godbolt — is charged with capital murder in Durr’s death and numerous other counts of first-degree murder and other charges. He has pleaded not guilty. Prosecutors are seeking the death penalty.

Durr’s name will live forever on the memorial, which this year grew by 360 names, 128 of which fell alongside him in 2017. Rushing said the friends and family who come to represent them are treated with great respect — groups’ buses were escorted across the city by motorcycles, and were greeted by officers when they arrived at the candlelight service. They were then escorted to their places through an honor guard corridor.

Rushing said it took more than one half-hour to read through the names of the honored dead, adding that Durr’s name is in good company.

“He had officers from all across the country with him,” he said. “It was very powerful.”

The fallen officers’ memorial service will be held on the West Front of the U.S. Capitol today at 10 a.m., with a wreath-laying ceremony immediately following. 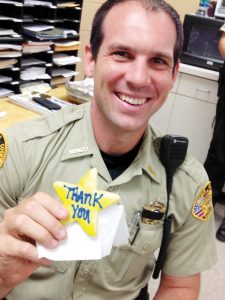 Melissa Colorigh traveled to Brookhaven Saturday to hear her mother’s heart beat again. She put the stethoscope in her ears... read more