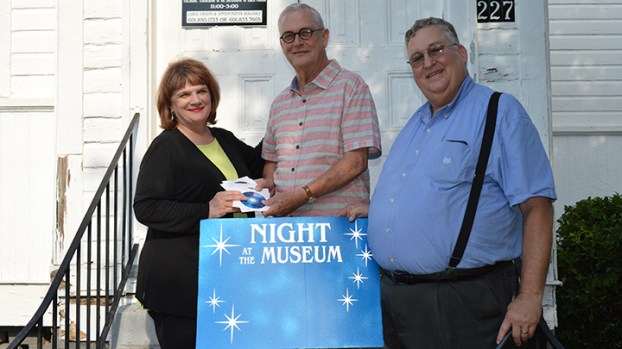 Photo by Gracie Byrne/Julia and Chuck Ivey donate copies of videos from “Lincoln Live” to the Lincoln County Historical and Genealogical Society Museum on South Church Street. “Lincoln Live” was a cable show that focused on Lincoln County locals and was televised on cable TV in the ‘90s. Pictured are, from left: Society president Cathy Bridge, Chuck Ivey and museum member Joe Brown.

A video of attorney Robert Jones talking about poetry and politics hasn’t been seen by the public since 1995.

That will change soon.

That episode of “Lincoln Live” will kick off “Night at the Museum,” a members-only event at the Lincoln County Historical and Genealogical Society Museum on South Church Street.

Jones was interviewed by Chuck Ivey for the cable show. At the time of the production, “Lincoln Live” was operated by Sammons Communications, now Cable One. Ivey and his wife, Julia, recently donated several copies of the series to the museum so the public can enjoy them once again.

Museum board members plan to show the exclusive videos quarterly as a series. The videos were filmed 20 to 40 years ago and include former Brookhaven and Lincoln County leaders and celebrities. The first in the series will be June 14 at the museum. Members will be admitted for free. Individual memberships can be purchased at the door for $20. There is limited seating so reservations are required. To reserve a seat, email cathy.bridge@gmail.com or history39601@gmail.com, or call 601-833-8483.

“This is an effort of the society to provide benefits to our membership and an opportunity for the society to enjoy exclusive information about our local history,” said society president Cathy Bridge.

Members say it will be fun to watch the shows and reminisce.

“Chuck and Julia Ivey have graciously given the museum copies of interviews that they produced years ago with a local cable show,” said vice president Joe Brown. “Each interview is with outstanding citizens that were in Lincoln County’s past, and the topics vary from local history to entertaining stories.”

Sponsors of the “Night at the Museum” include Silver Cross Foundation, Trust of Brookhaven, Brookhaven-Lincoln County Chamber of Commerce Tourism Council, Bank of Brookhaven and the Rotary Club of Brookhaven.

Members are also on the lookout for other local historic videos they can use for future events, as well as sponsors for the programs.

“These sponsors are key to our museum’s maintenance and daily operation,” Brown said. “If you can help the society provide genealogy resources and local history, please let us know.”

The 19th-century building is also getting a touchup just in time for the series start. Renovations will get underway Monday at the former B’nai Sholom Jewish Synagogue.

“This has been a project for the museum for more than a year with our society,” said Brown, who is also the building committee chairman. “The process included identifying what had to be done, preparing the facility, acquiring quotes and selecting a contractor. The most important step was asking groups within our community to help financially with the costs of renovation.”

Bridge said the 122-year-old building needs to be painted inside and out, a leaky roof fixed and the wood repaired in some areas like around the steeple.

“We’ve had some generous donations getting the work done,” she said.

Painting is a priority, then the committee will look at making the entryways easier to maneuver.

“We feel like we’re close to getting enough to get all the work done that’s needed,” she said.

The museum will be closed Tuesday and Thursday to allow for interior painting.

The building was originally constructed by the Jewish community in Brookhaven in 1896 as a house of worship. The building was deconsecrated in 2010 and a long-term lease was given to the society. The purpose of the museum is to encourage interest in family genealogy and local history for Brookhaven and Lincoln County. There is also a section that houses Jewish history, he said.

“We look forward to a new, renovated building when our renovation projects are complete,” Bridge said. “I cannot begin to express our great appreciation to the organizations that have contributed to maintaining our museum.”

The return of blue skies and sunshine seems to have loosened up wallets and pocketbooks in Brookhaven, as sales tax... read more