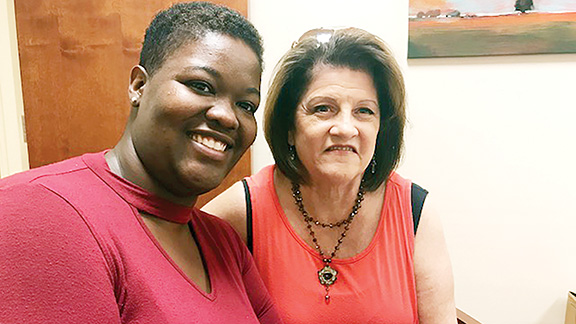 Photo submitted Emilee Cutler with Habitat for Humanity of Lincoln County will be working the Angela Kelly and her three daughters, Madison, Morgan and Mallory, as they complete the process toward home ownership. Pictured are, from left, Kelly and Cutler.

Madison, Morgan and Mallory Kelly will soon be swinging hammers and measuring boards, helping to build a “Home, Sweet Home” of their very own.

The three girls and their mom, Angela Kelly, were chosen by Habitat for Humanity of Lincoln County to become the organization’s next homeowner partner. The Kellys will attend classes over the next few months on home ownership and finance in preparation for the build.

“It’s a blessing to know that it’s possible to get this type of help and support from Habitat for Humanity,” she said. “God is good.”

The family will work closely with Habitat in the design and building process and, together, will donate 250 volunteer hours, said Habitat executive director Suzanne Smith.

Habitat accepted 13 applications in January and the homeowner selection committee carefully reviewed each one. Kelly, a single mom who works at Pike National Bank, stood out.

“We had some hard decisions to make but they seemed to be the best,” Smith said.

Smith said the committee didn’t know until after the selection was made that Kelly had applied previously. She didn’t qualify then, but tried again.

“Everything fell into place,” Smith said.

Kelly’s daughters are 11, 9 and 8, and will have a hand in choosing design elements for their new home.

“I think this will be a big change for them,” Smith said. “The girls are really excited.”

There’s still the question of where they’ll build the house and how large it will be. They have lots in the city and in the county, and approved plans for modest homes that have up to four bedrooms.

“We don’t want to put them in a house they will grow out of soon,” Smith said.

The new house will have two bathrooms, which makes Kelly a happy mom. She’s already decided she’ll enjoy her own bathroom and let her daughters share the other.

The homes are built with as many donations and as much volunteer labor as possible. They’re sold to the homeowner utilizing a 30-year, zero-interest mortgage, thereby allowing Habitat to fund future builds.

The sweat equity is important because it gives owners a stake in the home since there’s just a small down payment required.

“We want them to be invested in the home so they’ll feel more like it’s theirs and take care of it and enjoy it for many years,” Smith said.

This will be the 15th house built by Habitat since the volunteer organization started 20 years ago. The last home built was for Sophia Catchings and her mother, Ellen, in 2016.

Girls Night Out is branching out a bit. Tickets go on sale June 1 for the popular social shopping event.... read more