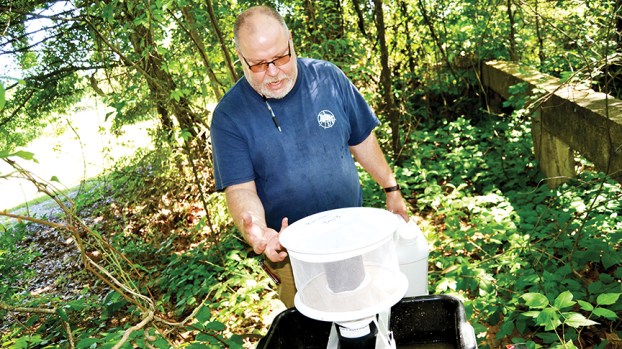 Photo by Donna Campbell/Technician Scott Williams with Vector Disease Control International sets a trap to catch mosquitoes at one of five sites in the city. The mosquitoes are collected each morning, frozen and sent to the state health department in Jackson for testing.

Mosquito control is all the buzz for the city of Brookhaven

The mosquitoes are here.

While that means job security for Vector Disease Control International, the company is doing its best to keep Brookhaven skeeter free.

They started in early April setting traps to gather mosquitoes for testing by the state health department. Trucks started spraying around April 15, hitting each of the five zones “just about every week.”

As the weather warmed, the mosquitoes swarmed.

That’s when Vector kicked up its game.

“We haven’t really had enough mosquitoes in the traps yet, but we’re just now starting to roll,” contract supervisor Brandon Cobb told the Brookhaven Board of Aldermen Tuesday night. “The first of June to mid-June is when mosquitoes really start getting out and about and wanting to eat us all up.”

It’s not unusual for technicians to find at least 10 different species of mosquitoes in the traps they set out throughout Brookhaven each week. There’s one trap in each of the five wards, usually in a central location in an out-of-the way spot. They’re checked each day.

Gravid traps are used by Vector to collect local populations of Culex pipiens — the house mosquito — which are then tested for the presence of West Nile virus.

The traps are a plastic wash basin filled with rancid water — a mixture of alfalfa and water — with a small vacuum that sucks the mosquitoes into a net. Technician Scott Williams puts them out each afternoon and collects them each morning. The mosquitoes are frozen then sent to Jackson.

Williams also conducts larval surveillance and adult mosquito surveillance, trying to determine the mosquito distribution, density and species composition in the target area. That helps them understand the threat and address it properly.

Crews are always on the lookout for standing, stagnant water, so they can eliminate the mosquitoes prior to them becoming adults. Mosquito larvae are relatively poor swimmers and they can’t retain their position in flowing water. They are typically just washed downstream to their deaths. That’s why they look for still water for survival.

Cobb said homeowners should watch for anything that could hold enough water for mosquitoes to lay eggs in — even as small as a soda bottle cap.

“We’ve had a few calls from people asking us just to come spray or come look,” he said.

Ward 1 Alderman Dorsey Cameron requested Vector contact a resident who lives on Locust Trail off Brignal Road. It’s a dead-end street and the woman said she had not seen a truck spraying for mosquitoes. She complained to Cameron about the number of mosquitoes and horseflies in her yard.

Cobb said they are spraying each zone weekly — using a poison that kills mosquitoes on contact — but they’re not on a set route in each zone. Their trucks are also a lot quieter than what people are used to hearing.

“They’re not as loud as the old trucks used to be, and if you’re not sitting outside and see the truck, or sitting near an open window, you’re not going to know we’re there,” he said.

They spray from 7:30 p.m. to midnight each night. After a holiday, they double out to cover two zones.

“We may be on Jackson Street at 8 o’clock on one Monday night and 10 o’clock on the next one, so they may not see us. But we are there and we are spraying,” Cobb said.

Technicians plan to visit Locust Trail to look for water sources “and see if we can eliminate some of her problems that the spraying’s not getting,” he said.

Cameron said the homeowner complained about an excess of mosquitoes and horseflies.

The company started in 1992 in Arkansas and Mississippi. They have contracts in Greenville, Jackson, several communities in Hinds County and also Rankin County.

Vector does fully-integrated mosquito control programs throughout the United States and also offers aerial mosquito control. Two airplanes are located in this region and are used if mosquito numbers get higher than what can be controlled with spray trucks and larvicide.

Lincoln County saw a case of West Nile virus last year, and Vector used aerial spraying in the man’s neighborhood after it was notified by the health department.

Mississippi is home to more than 60 species of mosquitoes.

She was in good spirits, even though the party ended too early. By 9:30 p.m. on election night, Sally Doty... read more