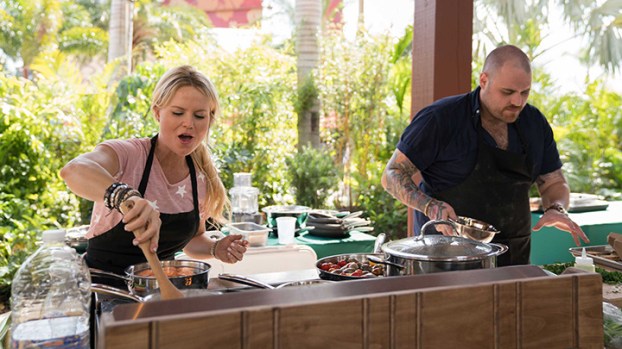 Brookhaven native could be a ‘Star’

Though she’s only 5-foot-4, chef Katie Newman Dixon is a huge force to be reckoned with in the Food Network kitchen.

Dixon, the daughter of Vickie and Henry Newman of Brookhaven, is one of 10 contestants featured on the season 14 premiere of “Food Network Star.” The nine-episode series begins Sunday at 8 p.m.

Dixon, 35, learned her work ethic and tenacity growing up in Lincoln County and spending weekends on her grandparents’ farm. It’s also where she developed an appreciation for fresh vegetables and healthy foods which she incorporates into her recipes. That’s showcased in her culinary point of view — Southern-rooted foods with a healthy international spin — and it’s what viewers will see as they watch Dixon on “Food Network Star,” beginning with the first episode shot at Universal Orlando Resort’s Volcano Bay in Orlando.

The contestants’ first challenge is to prepare their signature dish, but make it portable and park-friendly. Then they’re paired up and must convince guests to try their dish over their competitor’s.

She wanted to showcase her Southern roots and Mississippi’s cattle industry by doing a spinoff of a steak and potato. She prepared a duo of roasted and braised beef over sweet potato grits. Dixon infused the sweet potatoes with fresh orange juice, fennel and star anise.

But, it was not an elevated dish that’s easily transportable.

“I never would have picked that signature dish had I known that I was going to have to make it park-friendly,” she said.

However, Dixon is a sweet talker and a former Miss Hospitality of Mississippi who used her best Southern charm to convince park guests to take a bite.

The contestants have filmed the majority of episodes already but still have a bit of taping to do, she said. But Dixon can’t say how many of those episodes she’ll be in.

She hopes her personality shines through and people see her as a Southern girl who loves people, food and entertaining. She believes she has what it takes to be the winner of “Food Network Star.”

“I think when you’re comfortable being yourself and just being you and bringing your personality to the table, you can win,” she said.

A top 6 finalist on Fox’s “MasterChef” in 2016, Dixon’s dream is to host her own show on television, specifically on the Food Network.

“I’d love to share my story and who I am as a chef, my world travels, my healthy spin on things and my Southern roots on the world,” she said. “This was my opportunity and I definitely took advantage of it.”

Dixon is willing to give it all she’s got.

“It’s putting your head down, digging deep and finding out how tough you are, and having a great attitude along the way with it,” she said. “I definitely think that was instilled in me as a child growing up in the Newman family. We always had to work hard, be determined and to believe in yourself. I definitely think those things show true throughout this competition.”

During filming she cooked for hosts Giada De Laurentiis and Bobby Flay as well as several other celebrity judges. She said the Food Network has been encouraging to all of the contestants.

“They create an atmosphere that truly feels like sitting around the dinner table at home with my family growing up in Brookhaven,” she said.

But just like real life, she’s learned that not every day is easy.

“It’s finding your best on the hard days, not just the good days,” she said. “Each and every part of this has been an amazing ride. I would not be here without the love and support of family and friends. I hope I make everybody proud, that they see my love and energy, and that I love, nourish and inspire the soul.”

Dixon is a private chef and owner of Birdhouse Cafe in Hattiesburg. She was recently named Best of the Pine Belt 2018 Best Pine Belt Personality. She and husband, Todd, live in Hattiesburg with their two daughters.

The air is thick and warm, and the waves are gently rolling against the beach. The noise of playing children... read more