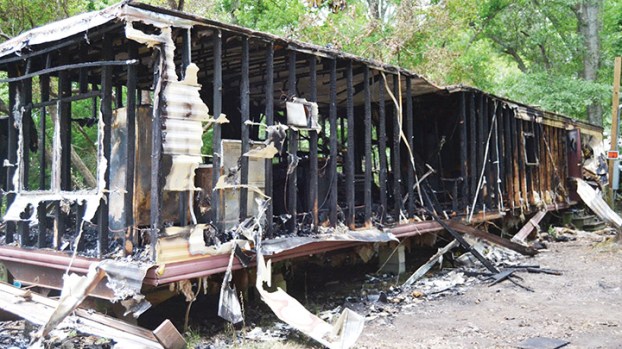 Photo by Donna Campbell A Brookhaven woman was injured Monday as she climbed out a busted bedroom window to escape a fire that destroyed her home.

A Brookhaven woman sliced her arm as she climbed out of a broken window Monday to escape a fire that turned her mobile home into a blackened frame, authorities said.

Brookhaven Fire Chief Tony Weeks said units were called to the fire at a mobile home park at 1216 Gleason Loop around 10:15 a.m. They found the trailer at Lot 14 in the back of the park in flames.

Weeks said it appears the woman was home asleep at the time of the fire.

“She woke up and the house was on fire,” he said.

He said the woman apparently cut her arm on broken glass as she escaped through a bedroom window.

She was taken by ambulance to King’s Daughters Medical Center and then flown to Jackson by LifeFlight, he said. Her condition is not known at this time.

The cause of the fire remains under investigation, he said.

Brookhaven police on hunt for suspects in armed robbery

Brookhaven police are asking for the public’s help in locating a man wanted for questioning about an armed robbery that... read more