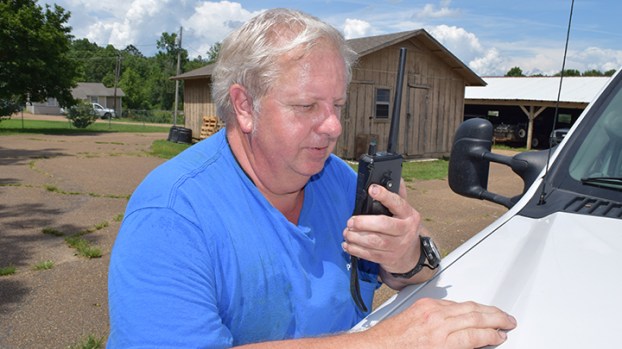 He was coming out of Franklin County on Highway 84, years ago, when the tornado warning was broadcast.

Patrick Brown, technology coordinator for the Mississippi School of the Arts, was right out of high school then and did what most young men would when faced with a tornado — he hit the gas, shot up Interstate 55 and caught the twister crossing over just outside Wesson.

“The sky lit up with lightning as the tornado was crossing the interstate. Of course that freaked me out,” Brown said. “Immediately I got on the radio and contacted the National Weather Service. They were able to warn the town and other small communities that way because we had confirmed reports.”

Brown was part of the SKYWARN Amateur Radio Network, and he made his reports to NWS using his ham radio, the non-commercial radio frequency spectrum set aside for emergency, recreational and sporting communications among licensed amateur broadcasters. He got into the hobby as a child, playing with CB radios — in junior high he modified an old FM radio to pick up air traffic control communications, and in high school he learned Morse code and became licensed for shortwave broadcasts.

“Ham radio is a hobby. It’s all about making contact, making friends, whether that’s in your neighborhood, your state or all the way across the world,” Brown said.

Ham radio can be as relaxed or intensive, as recreational or serious, cheap or expensive as desired, and the Southwest Mississippi Amateur Radio Club is happy to show anyone how to get involved.

The club is participating in the National Association for Amateur Radio’s annual field day next weekend, a 24-hour radio test involving around 40,000 amateur broadcasters in the U.S. and Canada working to log as many contacts as possible. The local chapter will set up shop at the Brookhaven Recreation Department on Hwy. 51 and broadcast from 1 p.m. Saturday, June 23, until 1 p.m. the following day.

But they won’t be too busy to show any interested visitors how their radios work.

“We invite the public to come out, especially the younger generation, and we’ll let them talk on the radio if they’d like to,” said club president Jeff Winborne. “You don’t have to be a member to visit with us, and we’ll show you what it’s all about.”

Winborne said the club would hand out materials showing interested hobbyists how to get licensed for ham broadcasts, and will be issuing $15 licensure tests early on Saturday to those who have already started their training. Anyone who gets interested based off the field day activities can drop in on the club’s monthly meetings for more learning — the group meets in Brookhaven on even months and in McComb on odd months.

Ham radios utilize mostly high-frequency bands of the radio spectrum — not reserved for government communications — to broadcast around the world, depending on weather and radio wave behavior. Licensed ham operators commonly talk to peers in far-off nations like England or Australia, and can transmit voice communications as well as text or data.

“It’s what you want to do with it,” Winborne said. “If you want to talk local, you can get started for less than $100. For $500 or $600 you can talk worldwide. It can get a little expensive if you want to keep building or adding on, or you can just get what you need and hold off there.”

“The youngest licensed operator in the U.S. is 9 years old, and it goes on up to grandmas and grandpas,” Winborne said. “Doctors, lawyers, all kinds of people, all walks of life — most are just normal folks like you and me who enjoy being able to transmit to unusual places without depending on any type of internet or smartphone. It’s done independently, with your own equipment, and it’s a good thing to be involved in.”

More information on the club can be found online at http://w5wqn.net/.

A Brookhaven woman sliced her arm as she climbed out of a broken window Monday to escape a fire that... read more