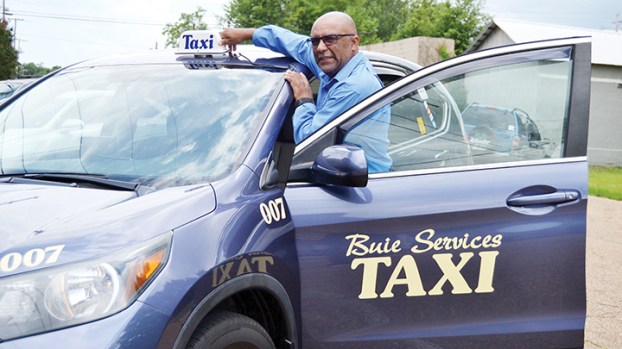 Photo by Donna Campbell/Brookhaven native James Buie moved home with dreams to start his own business, specifically a taxi service for his hometown.

James Buie spent a lifetime working for the man. Now, he’s ready to be his own boss.

“I always dreamed of having my own business,” he said.

He’ll do that July 1, when Buie’s Taxi Services gets rolling.

Buie, the son of the late Bob and Rebecca Buie, grew up in Brookhaven and joined the Marines after graduating high school. His military service took him to Vallejo, California, and he settled there after his discharge.

His mother was a big inspiration for planting the business seed, though his younger self didn’t appreciate her entrepreneurial nature. She tried to get him to sell snow cones decades ago and even brought home an ice crusher.

“I regret I didn’t understand,” he said. “I was a teenager.”

But, through the years, his mother’s words stayed with him.

“For the last 27 years, I would come home to visit and didn’t have a ride from the airport. Someone would have to pick me up,” he said. “I always told myself if ever I retired, I was going to come home and change that situation of not having any transportation. So, here I am.”

Buie worked several jobs in California after the Marines, including driving a bus and a limousine. He was also an Uber driver.

After moving back to Mississippi, he drove a school bus in Canton for six months before taking a job with the City of Brookhaven in the street department. One of his job duties for the city is driving a truck.

Public Works Director Keith Lewis said Buie has a lot of drive and determination. He also believes he has a good idea — bus riders need a way to get to a hotel when they arrive in Brookhaven, and so do folks coming in by train and plane.

Lewis is supportive of his employees and hopes Buie’s new venture does well, not only for the city but for Buie, too.

“If they can better themselves, get after it and go for it,” he said.

Buie has worked for the city since June 2016 and plans to stay on while also running his cab. His goal is to hire a driver for mornings and afternoons. He’ll do late afternoons and evenings. Eventually he’d like to have a fleet of cars and drivers and run a bus service as well.

But for now, it’s all Buie.

Though the blue Honda CR-V is fitted with a meter, he’s charging a flat fee for his service. It’s $6 for a trip within the city limits and $1 for each additional person sharing the ride. He cuts the cost in half for senior citizens, charging just $3 a ride for anyone 62 and up.

The shoppers are coming, from Jackson and McComb and Natchez and Louisiana, probably 1,000 of them. Margaret Ann Britt is... read more