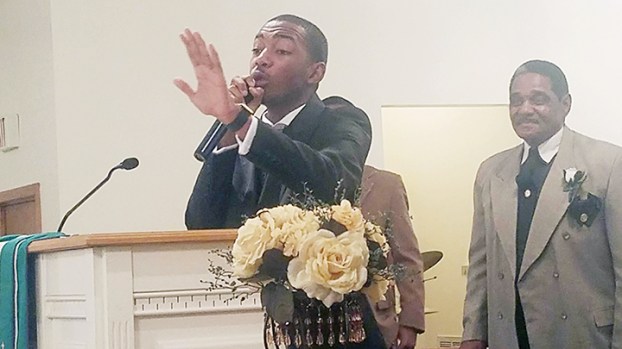 A Brookhaven teenager who preached his first public sermon just two years ago will travel to Memphis next week to serve as historian for the National Baptist Youth Convention of America.

Davion Brown, 19, received the call Thursday with the invitation.

Both are huge honors for Brown, the son of Arreika and Fred Thomas and Sherrod Dixon.

The Ole Brook grad, who’s now a sophomore at Mississippi College, had planned to seek the presidential post, but neglected to turn in the finished application. He was at a church service in March and Davis announced him as the youth president.

As president, Brown is hoping to involve the state’s Missionary Baptist youth in more than just the summer convention. He has plans to organize youth rallies and mission trips to get young Christians more involved with their faith and to teach them to share it with others.

Besides his work with the state and national youth conventions, Brown stays busy preaching at revivals. His 2004 Nissan Altima, with more than 265,000 miles on it, will be running the roads a lot this summer. He was in Biloxi last week and just finished up at the Youth and Young Adult Revival at Clear Creek M.B. Church in Crystal Springs Friday night. Next week he’ll be the guest preacher at Tabernacle M.B. Church in D’Iberville, Davis’ church.

He’s grown as a public speaker and minister since he led services at New Hope M.B. Church in Brookhaven when he was 17.

“I realize my preaching has grown and improved since two years ago,” he said. “I go on Facebook sometimes and listen to sermons back from that time and I realize that my preaching has improved a lot. I still have a long ways to go but I can tell that it’s improved. I think me studying and me working, God is just blessing me to go all these places and to get these opportunities to serve in various areas.

Brown is studying business at MC and wants to get a degree in mortuary science. He also has plans to go to seminary.

He also gets so many requests to speak at events that he relies on his iPhone calendar to keep him from double booking himself, again. He hopes to schedule some time in there soon for a girlfriend, though he’s leaving that up to a higher power.

“I’m just waiting to see what the Lord has to say about that,” he said. “With my schedule how it is sometimes it’s kind of hard for me, but I still try to take time and have fun, and I still want to take time to just go and do things and have fun. So a girlfriend, it’s in the near future.”

Officials with the Lincoln County School District expect the proposed budget for Fiscal Year 2019 to be about the same... read more