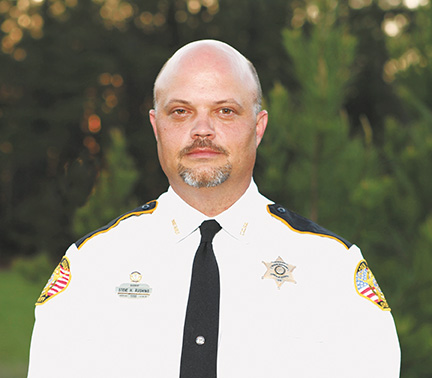 Hail to the chief.

Lincoln County Sheriff Steve Rushing has been elected president of the Mississippi Sheriffs’ Association, sitting him at the head of the state’s top law enforcement policy group. It is his second time to serve as president.

“It’s a great honor to be elected by the rest of the sheriffs in Mississippi,” Rushing said. “I think it reflects on what we’re doing down here in Lincoln County and how we’re representing our citizens.”

Rushing was voted into the job during the organization’s annual summer meeting in Biloxi earlier this month. His one-year term runs from June to June. He previously served as president of the association from 2012-2013.

MSA is a non-profit training and advocacy group comprised of all 82 county sheriffs in Mississippi. It provides professional development support to members and works closely with the Legislature in support of, or opposition to, bills affecting law enforcement.

As president, Rushing will serve as the group’s spokesman, sit in on legislative committees when necessary and serve in a handful of statewide postings — the MSA president is a member of the Mississippi Wireless Communication Commission’s advisory board. He’ll also make assignments to MSA committees studying certain bills and could be called to testify at legislative committee hearings.

“We have our say. Anything we would like to see dropped, or try to get passed, we’re the ones out there pitching it to the Legislature,” Rushing said.

Rushing said the association worked against a handful of bills during the 2018 legislative session that would have weakened law enforcement’s use of probable cause during traffic stops.

In the past, the association has dealt with bills concerning the use of police dogs and license plate scanners.