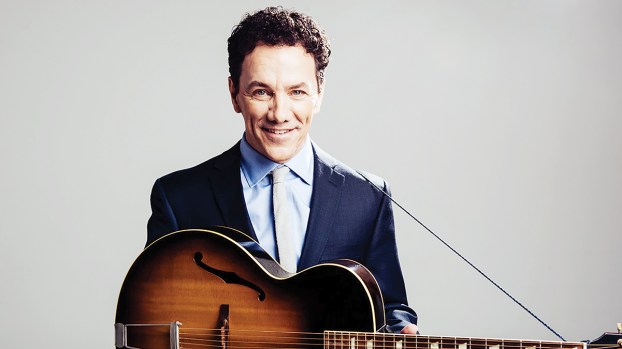 Pastor Greg Warnock first saw Menzies singing “I Was There” in a video posted on the National Quartet Convention’s social media. He was struck by the clear baritone vocals and Menzies’ talent for picking guitar. He talked to his deacons at FBC and they agreed.

“That song, ‘I Was There,’ basically communicates about the faithful presence of God — he never leaves us, nor forsakes us, in the good times and bad times and the hard times and the great times of celebration, God’s there — and that just touched my heart,” Warnock said.

Warnock did some research to learn more about him then called.

“We had a conversation. I invited him and he’s coming,” he said.

Menzies, who calls himself a Bible-believing Methodist, has traveled the country by invitation since 2013 when God led him to enter the ministry by preaching the word, telling stories and using songs to back up the parables.

Warnock said the program will be a little different than what is usually seen at FBC, but he believes those who attend will leave with a blessing.

“He is a very humble fellow. I think the depth of his sincerity and the nature of the music will really draw people in,” he said. “I was impressed with him and his music. If they want to experience something different, I hope they’ll come.”

Menzies recorded in the ’80s and early ’90s as Tim Mensy and hit the charts with a few songs that live on in YouTube videos: “That’s Good,” “She Still Loves Me in My Dreams” and “Stone By Stone.”

Originally from Virginia, Menzies moved to Nashville in 1980. His girlfriend, Brenda, moved there a year later and the two wed. Brenda Menzies sings on “His Way of Loving Me,” a Christian album he recorded in 2014. It was his first record in 12 years.

While Menzies’ career as a country artist never panned out, his ability to write songs that others wanted to record kept him busy.

“I never really thought about making a living writing songs that other people sang until I got to Nashville and it started happening,” he said.

A Christian since 1991, Menzies felt led to combine his talent for story-telling, music and scripture to create a ministry he calls “The Word & Song.”

He didn’t know he would be going into the ministry when he recorded the Grammy-nominated “His Way of Loving Me,” which also includes his arrangements of “Swing Low, Sweet Chariot” and “I Surrender All.”

“All I knew was I was going to make a Christian record,” he said. “I never realized it was the Lord leading me into the ministry.”

One of the songs on the album, “Lies the Devil Told Me,” is based on scripture in the Gospel of John.

“I will use John 8 where Jesus says to his disciples, ‘If you hold to my teachings, you will know the truth and the truth will set you free,’” he said. “Then further down in chapter 8, verse 44, he says the devil has no truth in him. He is a liar and the father of lies. When he speaks lies he speaks his native language. That really sets up the song, ‘Lies the Devil Told Me,’ really well.”

Lincoln County schools will split $24.6 million to get through the 2018-19 school year, a spending plan down slightly from... read more