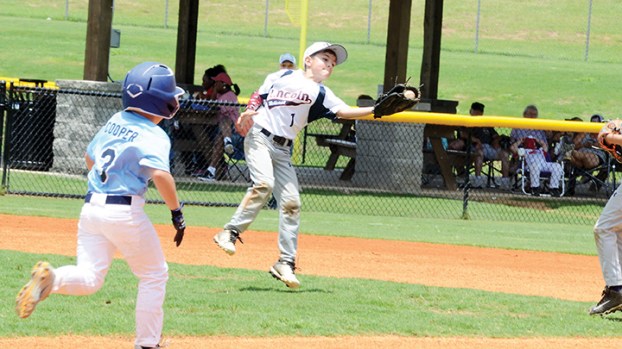 The 8U Lincoln County Nationals took two out of three Saturday at the Lincoln Civic Center Baseball Complex, defeating Natchez 9-6 in game one.

The Nationals fell to Pike County 11-2 in game two, and then they rebounded to run rule Walthall County 18-5.

The game started Friday night, but due to rain was postponed until Saturday morning with the game tied six all. Not even the postponement was enough to stop the Nationals from winning the game, getting three runs in the sixth inning.

“I’m so proud of the kids,” Lincoln County Nationals coach Lance Newman said. “They played outstanding. I couldn’t be prouder of these kids.”

The Nationals took a 4-2 lead into the third inning. Natchez cut into the lead in their half of the third and managed to tie up the game before the Nationals could get out of the inning.

With one out the Nationals managed to load up the bases in their half of the fourth. Natchez escaped the big-inning threat, recording the final two outs to keep the game tied.

The Nationals broke the tie in the top half of the fifth, bringing two runners across home plate.

With two outs in the next half inning, however, Natchez tied the game once more before the game was pushed to Saturday because of Thunderstorms.

When the game picked back up on Saturday morning, the Nationals broke the tie in their half of the sixth as they scored three runs to take a 9-6 lead.

Those three runs were all that the Nationals needed to win the game, as their defense rose to the task to prevent Natchez from scoring any runs in the bottom half of the sixth.

Clay Johnston has been an avid outdoorsman throughout his life, but his proudest hunting moment came in May when his... read more