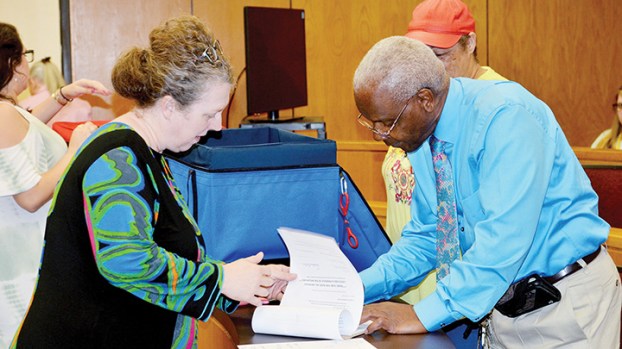 The GOP runoff ended Tuesday night before Lincoln County’s Republican votes were tallied, while the majority of the county’s Democrats got behind the losing man.

The Associated Press called the Republican runoff for the 3rd Congressional District in favor of Madison and Rankin counties district attorney Michael Guest over healthcare executive Whit Hughes at 8:11 p.m., and followed that at 8:32 p.m. by naming state Rep. David Baria the victor in the Democratic runoff for U.S. Senate against philanthropist Howard Sherman. Lincoln County Republicans were solid for Guest but late to the party, and local Democrats backed Sherman three to two.

In Lincoln County, Sherman was the man, beating Baria 393-233 with 63 percent of the vote.

Guest took the 3rd Congressional District over Hughes by a vote of 29,079-15,481, good for more than 65 percent. He was Lincoln County’s candidate, too, taking the local vote 1,342-806 for 62 percent. He will face Democratic state Rep. Michael Ted Evans and Reform Party candidate Matthew Holland in November in a race left wide open by U.S. Rep. Gregg Harper, who is not seeking reelection.

Voter turnout in Lincoln County was poor, though slightly better than the 10 percent predicted by circuit clerk Dustin Bairfield — 2,789 ballots were cast in the runoff, good for almost 14 percent of the county’s 20,534 registered voters.

“On these runoffs, you only get the voters who are either civic minded or have a special interest,” he said of the low turnout. “Now, in November, with the number of positions on the ballot and the number of candidates are running opposed, we should have a much better turnout, hopefully up around 8,000 or so.”

While Tuesday’s runoff held no local appeal for Lincoln County, November’s general election will be a higher-action affair. The ballot will feature three of the five Lincoln County School Board positions — Districts 1 and 2 will run for a full 6-year term, while District 5 will run in a 4-year special election. The ballot will also have a wide-open race for chancery judge, an opposed circuit judge race, a Supreme Court race and a Court of Appeals position.