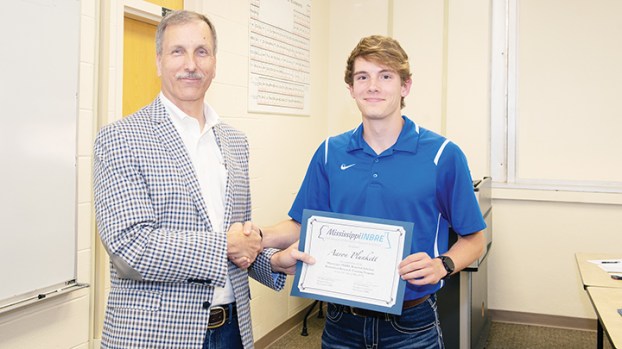 A horrible wreck two years ago left a Lawrence County teenager wondering if he’d be able to run again. Now he plans to become an orthopedic surgeon so he can help others.

Nineteen-year-old Aaron Plunkett, the son of Michelle and Thomas Plunkett, was traveling home to the Divide community from Columbia Academy when he fell asleep and crashed his Toyota Tundra into a tree.

“We were expecting me to never run again, but through the orthopedic surgeon that worked on my leg, I’ve been able to start running in college,” he said. “That really amazed me how that worked out and I want to be able help people the same way.”

His mother said he fell asleep coming home one night.

“The Lord had his hand on him,” she said.

The accident caused him to rethink his priorities and focus on a medical career in his home state.

“He said he realizes how blessed he is,” she said.

After a year of rehab and high school graduation, he enrolled at Mississippi College where he recently wrapped up his freshman year with a 4.0, earning himself a spot on the president’s list.

With summer approaching, he has his eye on several research positions at several universities like Mississippi State, Ole Miss, Southern Miss and Louisiana State. He spent a weekend with his mother writing essays and completing applications.

“He wants anything he can get to put on his resume that would give him an edge to be able to be accepted into medical school,” she said. “It’s time consuming to apply to all that, but he’s being exposed to and learning so much this summer.”

Plunkett was selected as part of a group of only 34 students in Mississippi to participate in a biomedical research internship through Mississippi IDeA Network of Biomedical Research Excellence Research Scholars program.

Students in the program work with researchers throughout the state to conduct biomedical research. This practical experience provides students with a skill set and knowledge base which will help them as they further their educational career and their research.

“The Mississippi INBRE Research Scholars program provides our students with real-world, hands-on research experiences,” said program coordinator Dr. Glen Shearer. “Our students engage in cutting-edge research in some aspect of biomedicine and, thereby, become a part of the world-wide enterprise to discover and disseminate new knowledge.”

Plunkett spent his first week of the internship at USM learning laboratory basics and safety techniques. During this time, he was also able to hear from professionals about graduate programs, resume and interviewing tips, and presenting at professional conferences.

After completing this training week, Plunkett began working with Dr. Hao Xu at Southern Miss to complete the remaining 10 weeks of his internship. He is researching the effects of mast cells in food allergies.

He gets paid for the internship, but is paying for his room and board at Southern Miss.

“Along with their research activities, our students begin to build their professional ‘people network’ — some of whom will be life-long colleagues and mentors,” Shearer said.

The busy young man — he works at Plunkett Farm Supply and Greenhouses in his spare time — also has an interest in aviation. He received his pilot’s license at the beginning of summer.

He would have gotten his license sooner but the wreck hampered his progress. He couldn’t fly because of the injuries to his leg.

The Brookhaven School District’s Board of Trustees hired a Jackson attorney Tuesday to advise them before they decide the fate... read more