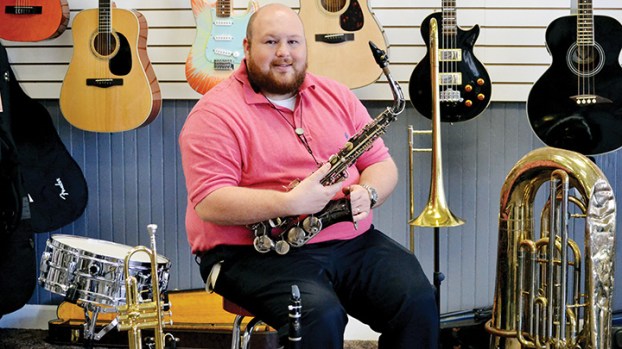 Photo by Donna Campbell Andrew Different is the new head of the music program at Bogue Chitto Attendance Center, which will include an elementary music program, middle school and high school choirs and a band.

Andrew Different can’t remember the moment he decided to be a band director. It was always his goal.

The 27-year-old musician is realizing that dream this week after the Lincoln County School Board voted unanimously Thursday for Different to take on the job as director of the Bogue Chitto Attendance Center’s new music program.

“We would just have long conversations about band and music,” he said.

Merrell is recreating a band program at Bogue Chitto, which has been without one since the late ‘60s. Loyd Star is currently the only county school with a band program.

With the board’s approval of Different Thursday, that will soon no longer be true.

“It’s almost surreal,” Different said. “I feel very thankful for Scott choosing me and I feel very honored to do this.”

Different grew up in Crystal Springs and took piano lessons when he was in the third or fourth grade. He joined the fifth-grade band as soon as he was old enough.

“I loved it. It was something that I just immediately gravitated to,” he said. “When I got in band, I just knew that was for me.”

He loved playing the saxophone at football games and in competitions during high school. Different attended Copiah Academy, where his mother is still a teacher.

“It was just one of the best experiences of my life,” he said.

There was never any particular moment when he made a decision to become a band director.

“I just loved band so much I couldn’t imagine not doing it,” he said.

He attended Copiah-Lincoln Community College, partially on a band scholarship. His instructors were Stanley Stewart and Shaw Furlow. He credits both with helping him follow in their footsteps to direct bands.

That’s also where he met Kayla Furlow, a very distant relative of the band director.

After Co-Lin, he continued in band at University of Southern Miss and received his degree in music.

He graduated in 2015, married Kayla, moved to Brookhaven and was certified to teach a month later. He was immediately hired at South Pike High School as assistant band director. He led the elementary and middle school bands and assisted with the high school band, which was directed by Leonard McDonald.

“One of the first things he told me was, ‘Hey, you’re new. You’re fresh out of college. I’m going to make sure that when you leave here you’re ready to take your own band,’” Different said. “For the last three years, that’s what he did.”

When they both started at South Pike three years ago, there were 14 students in the band and the program was struggling to stay afloat. He expects about 70 students to be on the field in the fall.

“We transformed that program,” he said. “We basically had to start from scratch.”

Different will be over an elementary music program, middle school and high school choirs and a band program.

“It’s going to be a lot of hard work, but I’m looking forward to it,” he said. “We can’t get on the football field on Day 1. It’s just not going to happen. What I’m hoping is the next three to five years that we can have a band program that performs and gets evaluated on the state level. Take them to competitions, take them to clinics.”

He wants students to leave his program with an appreciation for music.

My ultimate goal starting the program is to have a group of kids, whether it’s 10 kids or 100, if I can instill and cultivate a love and appreciation and understanding of music in these students, and put them in the right direction to take that with them for the rest of their life — either going to college on a scholarship or just having that music knowledge to where if they want to form their own band or play with friends — that’s my ultimate goal.”

The Differents are parents to a dachshund named Gibson, after the popular brand of guitar. They attend First Baptist Brookhaven where Different plays electric guitar in the praise band. He also teaches at Brookhaven Music & Sound, and plays in owner Tyler Bridge’s band and his jazz quintet.

The Lincoln County School District approved a $24.6 million budget for Fiscal Year 2019 with just three of the five... read more