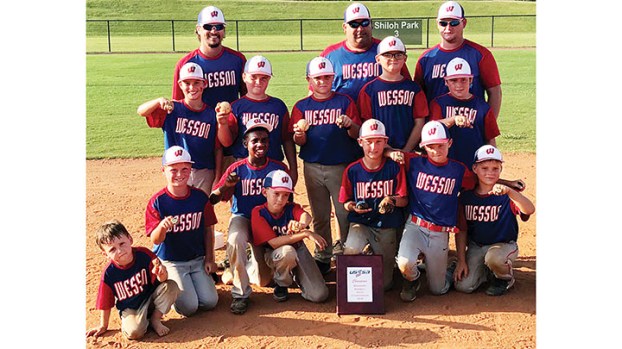 Wesson 9U All-Stars are state champs

Wesson’s 9U All-Star team had a successful summer, winning two of the four tournaments they played, including the 9U USSSA State championship.

“We were really anxious to play once we selected all stars,” head coach Travis Smith said. “We went to a tournament in Brookhaven to get prepared for the state championship tournament.”

The team went to Northwest Rankin where they went 2-0 in pool play games before falling in the championship game to Franklinton, Louisiana.

The state championship tournament took place at Shiloh Park in Brandon, and the Wesson 9U All-Stars went 2-0 in their pool play games and claimed the No. 2 seed in the single elimination knockout part of the tournament.

Wesson knocked off Clinton 7-2 in the semifinals before beating Florence to claim the 9U USSSA state championship trophy.

“The kids played really well in that tournament, and I was extremely proud of how well they played,” Smith said. “It was a big team effort to be able to win the 9U state championship.”

In the championship game, Wesson trailed 6-5 with two outs and nobody on base, but they put up 10 runs with only one out remaining in the contest to go on to win the championship, playing in a division a year older than their players.

“I thought once we got two outs, that I was just really proud of our kids,” Smith said. “We were competing a division up, and we were able to make it to the championship. Then we scored 10 runs, and won the tournament. That was fun to watch.”

Smith said that he enjoyed coaching the group of youngsters throughout the summer.

The camaraderie between the players and parents was something that Smith said he enjoyed.

“They were like brothers the entire summer,” Smith said. “That was what’s fun, is they loved playing baseball and they liked being around each other. We had fun away from the field, but when it was time to play we were ready to go.”

The team went 14-1 in their last three tournaments and outscored opponents 198-69 over that time. The team has been together the past three summers, and posted a 42-5 record over that time.

What will Eagles, Rebs and Dogs do?

College football is less than two months away, and all three FBS teams in the state have a chance to... read more