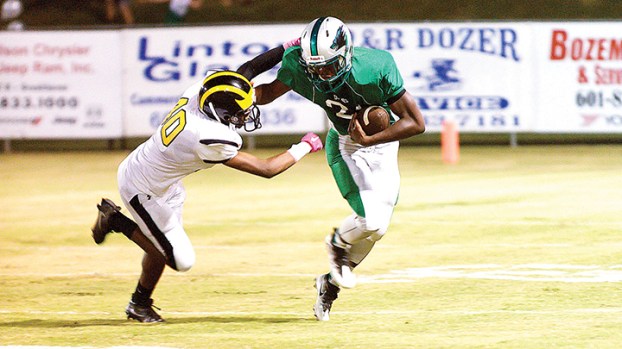 Daily Leader file photo Michael Brothern rushed for 747 yards and four touchdowns for West Lincoln last year. He had five interceptions on the defensive side of the football for the Bears.

West Lincoln head football coach B.J. Smithhart thinks Michael Brothern’s success is big for the success of his offense in 2018.

Brothern can score from anywhere on the field because of his speed and athleticism, which can negate the 15 or 20-play drive that can be grueling on an offense.

“He’s electric when he gets the ball,” Smithhart said. “It’s not that we can’t score on those long drives, but when he can score from 80 yards out that really helps out our offense.”

Brothern’s statistics from the 2017 season support that, as the sophomore running back rushed for 747 yards on 100 carries, good for 7.47 yards per carry. He scored four touchdowns on the season, and had nine catches for 43 yards.

“I think last year I ran the ball pretty well,” Brothern said. “I’m trying to become smarter when I do run it. I’ve been trying to get stronger and get better foot-work. I’ve tried to become a leader and make sure that everyone else is getting done what they need to get done as well.”

He was a threat on the defensive side of the football as well, totaling 49 tackles and a team-leading five interceptions for the Bears.

With the departure of Chase Owen to graduation, Brothern will be counted on even more than he was in 2017.

Brothern has been a force on the defensive side of the football as well for the Bears over his career, and he said it’s something he takes pride in.

“It’s nice to play on both sides of the football,” Brothern said. “I enjoy being able to play running back, because I have strong blockers, and then I get to turn around and be the safety in the secondary.”

Smithhart knows Brothern is going to be the guy West Lincoln counts on throughout the season to get the football, and even though other teams know it as well, they’re not going to shy away from it.

The Bears as a team have their sights set high, and Brothern’s success will have a lot to do with West Lincoln’s win-loss record.

“I’m just trying to step up and lead,” Brothern said. “I want to make sure that my teammates and I do well and we win. “

Primetime 23 is a list of the top players to watch ahead of the 2018 football season. Sevante Quinn was... read more