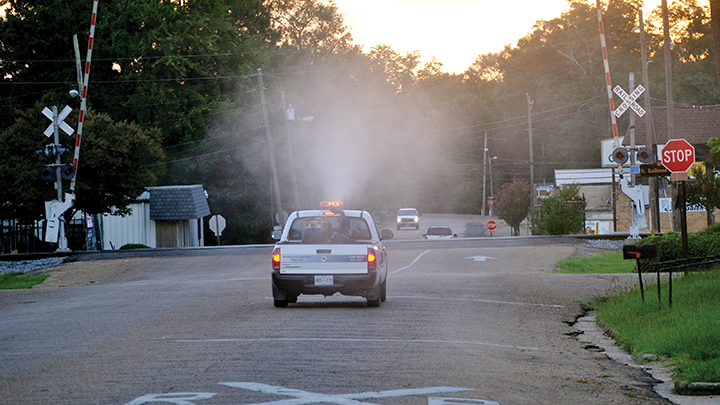 Photo by Brett Campbell/A Vector Disease Control truck sprays to eliminate mosquitoes inside the city limits of Brookhaven Thursday evening. Routes rotate through different sections of the city over the course of the month.

Old tires are the worst.

Mosquitoes will lay eggs in any stagnant water, but little pools inside old tires laying out in the weeds are the ideal spot. They don’t host any predators to eat the larva like fish or frogs. They don’t drain out like a ditch.

“An old tire is the No. 1 water source for mosquitoes to breed,” said Scott Williams, a technician with Vector Disease Control. “A tire always has water in it, and it’s a prime breeding ground.”

Vector is the City of Brookhaven’s contracted mosquito control company, and their techs will be paying extra attention to their spray routes and sample traps now that the Mississippi State Department of Health has announced the first case of human West Nile virus for 2018. The department reported the case, which is in Hinds County, Thursday.

“This first case of 2018 is a reminder that each year we have WNV cases in Mississippi and that all Mississippians need to act now to reduce their risk of infection, regardless of where they live in the state,” MSDH State Epidemiologist Dr. Paul Byers said in a department press release. “Most cases occur from July through September. While most infected people recover without any long-term problems, some develop a more severe infection that can lead to complications and even death — especially in those over 50 years of age.”

West Nile virus symptoms are often mild and present as fever, headache, nausea, vomiting, rash, muscle weakness or swollen lymph nodes. In a small number of cases, the disease can trigger encephalitis or meningitis, which can lead to paralysis, coma and sometimes death.

The department suggests people use mosquito repellent with an EPA-registered ingredient, like DEET, while outdoors. Other actions that can reduce the chances of mosquito-borne illness include removing all sources of standing water around homes and yards to prevent breeding; wearing loose, light-colored clothing to cover the arms and legs; and avoiding areas where mosquitoes are prevalent.

West Nile is carried by the Culex genus of mosquitoes. Vector looks for the genus in its mosquito traps, and once a trap gathers between 10 and 50 of the insects it is sent to the health department for testing.

“If they find West Nile in one of the mosquitoes in our traps, we’ll start spraying and trapping that area more heavily,” Williams said. “The traps are looking great so far this year. We haven’t had too much rainfall, and if it stays dry we’ll sail on through.”

Vector began spraying the streets of Brookhaven in April, and did an aerial spray on July 3.

Williams said some mosquito breeds will come out during the day if disturbed, but most wait until dusk.

“People will call during the day and say they’re being eat up by mosquitoes, but most of the time those are gnats, and gnats aren’t medically important,” he said.

For more information on mosquito-borne illnesses can be found at the health department website at healthms.com/westnile.