A congressional candidate making his rounds through Southwest Mississippi on Monday told county supervisors not to expect a plan for road and bridge funding from the state.

District 45 Rep. Michael Ted Evans, a Democratic candidate for Mississippi’s 3rd Congressional District, told supervisors a pending special session of the Legislature would likely take up an internet tax and a lottery, but neither would come close to providing the kind of funding the state needs to play catchup with its worn-out infrastructure.

“I can tell you the state isn’t going to do anything. I’m a legislator — I know,” Evans said. “The federal government is going to have to find a way to help the counties with infrastructure.”

Evans, of course, is trying to be part of that federal government. He’ll face Republican candidate Michael Guest, the district attorney for Madison and Rankin counties, and Reform Party candidate Matthew Holland, in the Nov. 6 general election. Republican U.S. Rep. Gregg Harper will not seek reelection.

Evans told supervisors the internet sales tax law and lottery would raise around $100 million that would likely be earmarked for transportation funding, but he said the state needs around $450 million per year to begin addressing its critical road and bridge problems. Lawmakers do not have a plan to bring in that much revenue, he said.

“One hundred million won’t buy a culvert or a load of gravel by the time you divide up between all the counties and cities,” Evans said.

District 5 Supervisor Doug Falvey asked Evans why legislators won’t raise the gas tax, which supervisors statewide have lobbied for as a fair use tax for years. Evans pointed out that 2019 is an election year.

“No one wants to run on a tax increase,” he said.

District 4 Supervisor Eddie Brown complained to Evans that oil revenues are down, State Aid funds were down and the Local System Bridge Replacement and Rehabilitation Program went unfunded for three years.

“We’re about down to just ad valorem taxes, and the counties can’t make it on ad valorem alone,” he said.

Evans said tax cuts — specifically exemptions allowed under the state’s franchise tax — must be undone to beef up state coffers.

“I may be the only politician who will tell you that,” he said. “All your money went to Walmart and Budweiser.”

He made efforts to paint himself as the rural candidate, comparing Lincoln County to his native Kemper County and joking he was the only congressional candidate to start his day feeding chickens. He’s a volunteer firefighter back in Kemper and worked for 23 years as a professional firefighter.

Molding himself as a country candidate seems Evans’ best strategy against Guest, who raised more than $450,000 in the Republican primary and runoff in a race centered on the Jackson area. 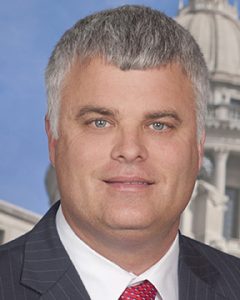