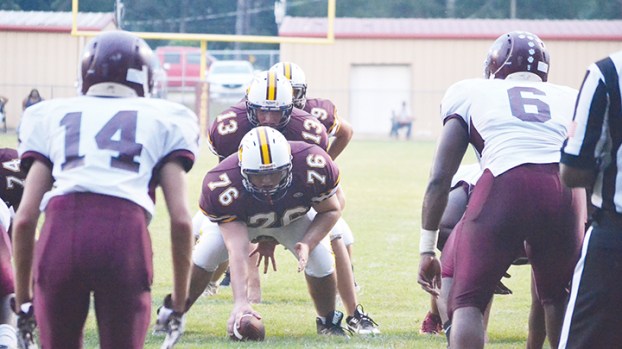 Daily Leader file photo Center Josh Milholen (76) and the Yellow Jackets return several starters on the offensive side of the football.

P23: Milholen is middle of the line

Josh Milholen is excited about the upcoming season for Enterprise because of the talent  the Yellow Jackets have returning.

The senior offensive and defensive lineman said he feels like the team this year could be one of the better ones Enterprise has had in a while.

“I’m really looking forward to the way that we’re going to work as a team this year,” Milholen said. “We’ll be able to strategize more this season because of some of the talent that we have back. We’ll probably be able to throw some more passes this season, and I’m excited about being able to play in that.”

Milholen played center for the Yellow Jackets last year, and he figures to slot in there again during his senior season at Enterprise.

Being a senior, Milholen said he’ll have to show the younger players the proper way to do things throughout the course of the season.

“As a senior, I’ll definitely be responsible for showing guys the right way to do things,” Milholen said. “We have to be able to be leaders as the older guys.”

The offensive line returns a plethora of startwes this season, and Milholen said that chemistry will help them throughout the course of the 2018 season.

Primetime 23 is a list of the top players to watch ahead of the 2018 football season. The offensive linemen... read more