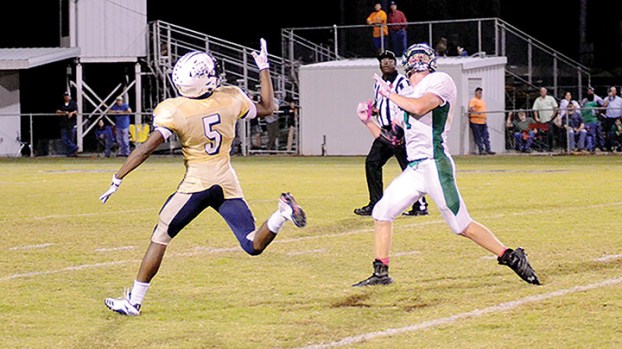 P23: The Upkins threat will be back for Bobcats

The Bobcats will have a reliable threat back at the wide receiver position this year for new quarterback Shaw King with Zach Upkins returning for his junior year after  a strong sophomore season.

Upkins had 27 catches for 364 yards for the Bobcats in the 2017 season, and head coach Gareth Sartin said he expects Upkins to have a big year again for the Bobcats.

“We’re going to count on Zach as a junior,” Sartin said. “We’re looking for him to take a big step this season from what he did last year. He has the chance to be a big receiver on the outside for us.”

Upkins was the go-to receiver for the Bobcats last season, as he led the team in receptions and receiving touchdowns.

“I want to be the best wide receiver that I can be,” Upkins said. “I’ve worked hard this summer at trying to become better.”

The junior receiver provides a comfort blanket to King in that he has experience at the receiver position.

“He has good speed, and he can score from anywhere on the field,” Sartin said. “He’s a weapon when we get to the goal line. We can throw it to him and he can go make plays for us.”

Upkins plays defense as well, and he recorded an interception for the Bobcats in 2017.

Bogue Chitto finished fourth in the district last season, but Upkins said he and the Bobcats have lofty goals this season.

“We want to win the district championship,” Upkins said. “We know that if we can win that, anything can happen.”

P23: Milholen is middle of the line

Primetime 23 is a list of the top players to watch ahead of the 2018 football season. Josh Milholen is... read more