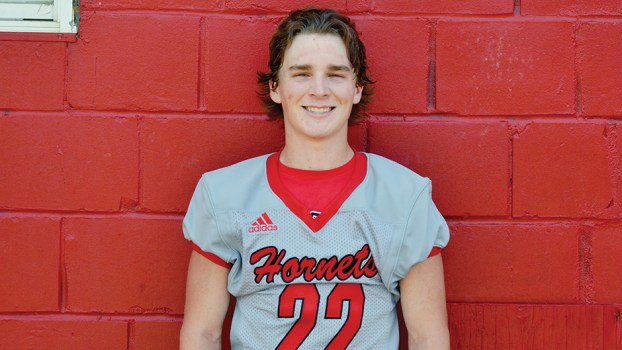 P23: Hornet leads from the back

Zach Nevels has moved from defensive end to the defensive backfield for Loyd Star, and the senior said he’s enjoyed that process.

“I’ve been playing defensive back in our seven-on-sevens, and coach (Brian Ford) liked me there, “ Nevels said. “I really like it there as well, and I’m looking forward to playing that position this year.”

Nevels had a strong season for Loyd Star in 2017, as he racked up 22 tackles on the year, including five of them for loss.

“Defense is something that I really enjoy,” Nevels said. “I played a lot on it last year, and I’m just hoping to have a good year this year.”

The senior also rushed for a touchdown for the Hornet offense in 2017 as well.

“I’m looking forward to carrying the ball if my number is called,” Nevel said. “I want to do whatever I can to help my team.”

He said he’s excited about the upcoming season and the opportunity to play as a senior.

“I thought we did pretty good last year, but we’re expecting more this year,” Nevels said.

Loyd Star has 16 senior football players and Nevel said that it’s up to him and the other seniors to make sure the younger players are in tune with what needs to be done.

“Being a senior means you have to show guys the right ways to do things,” Nevels said. “It’s about being a leader and motivating guys. That’s the big thing, is motivating guys to make sure that they go out and do the right thing.”

Jim Guess has been the leader of the Wesson defense for a few years now, and Cobra head coach Jeremy... read more