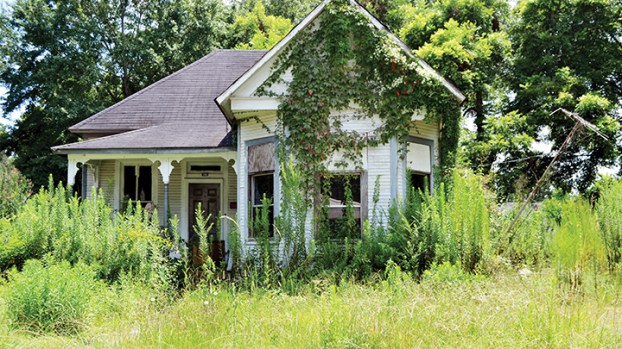 Photo by Donna Campbell Grass and weeds grow unchecked at a house at 151 Enterprise St. Wednesday.

Aldermen need the public’s help to identify derelict properties that are a nuisance in the community.

It’s the first step in identifying those properties that could be cleaned up by the owners before the city can step in and take action.

Armed with a list of addresses, City Building Inspector David Fearn will work to track down the owners so he can send out certified letters.

The owners — if found — must clean up their property or face a fee and fines if the city does the work.

Eventually, those properties not cleaned could be determined through a public hearing to be a menace to the public health and safety of the community.

But first, aldermen need an address.

“They’re trying to get a list together and then we’ll go from there,” said Public Works Director Keith Lewis. “You’ve got to start somewhere and that’s with the identification.”

She said she planned to turn in a list of properties Friday that needed to be cleaned up.

“If you know of vacant or occupied lots that you’re tired of seeing or that you’d like to see mowed, cleared, or cleaned up, please let me know soon,” she said.

Ward 6 Alderwoman Shelley Harrigill is also on the hunt for blighted areas.

“We get calls from people saying, ‘Hey, our neighbors have not cut their yard in three years. Nobody lives here. Can you do something?’ and we’re like, ‘We don’t have anything we can do,’” she said.

Through this process, aldermen can try to help.

“As aldermen, we can’t go knock on the door and say, ‘Can you please cut your grass?’ This is the process by which the city cleans it up and then charges it back to the homeowner,” she said. “I don’t even know where most of them are, but people are furious that we can’t do anything so that’s why about once a year we have to do this, because we don’t have any recourse.”

Harrigill recognizes homeowners in her ward with a Yard of the Month award. But not all yards can be award winners.

“There are some that are literally vacant and abandoned. No one has lived there for years. No one knows who owns the property. They’ve fallen into foreclosure,” she said. “There are these properties that have this big question mark where you’re like, ‘Who is responsible?’”

Not every yard called in will make the list.

“There are some where they don’t keep their property up as well as somebody else might like, but that, you can’t really can’t do anything about, that’s when you just try to encourage people to be neighborly,” she said. “But I think this situation with these properties is the person is gone, and they haven’t been there for a really long time, and they don’t know what to do to get in contact with somebody.”

She said the list of properties will be published by the city soon.

“That gives everybody legal notice and it gives the city the right to go in after they’ve given the proper amount of notice to cut it and then charge it back,” she said. “So it’s more than just, ‘They have an ugly yard or they don’t cut their grass,’” she said. “It’s that they haven’t cut their grass in several growing seasons. That’s the only time I hear about it. Otherwise, people don’t usually complain about their neighbors, but when it gets to the point where they feel like it’s unsafe, or unhealthy or unsanitary, then they get in touch with us.”

Two brothers stopped by deputies recently took different paths to get to jail. One chose the easy option and remained... read more