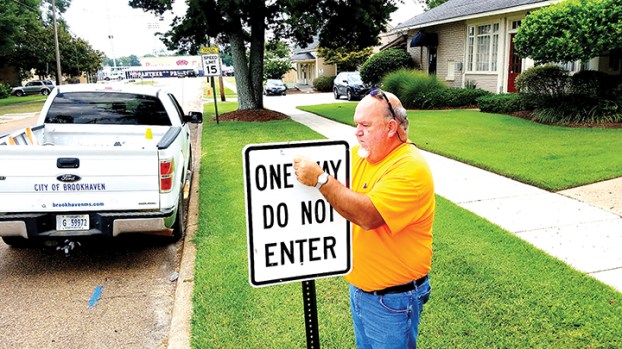 Photo by Donna Campbell/Billy Case with the Brookhaven street department puts up a “one-way only” sign on East Court Street Friday in preparation for the start of school.

BHS gets one way in, one way out

School officials are hoping a new traffic pattern at Brookhaven High School will be safer for students arriving for class in the mornings.

“Monticello is going to be busy,” said Brookhaven Police Chief Kenneth Collins. “All traffic coming into the school will be coming off of Monticello.”

Signs went up Friday designating North Third and East Court streets as one-way streets. All traffic entering campus will off East Monticello Street at North Third beside Panther Park. Buses and other vehicles will turn drop off and pick up students at the side door of the high school.

Traffic will exit on East Court Street only.

Martin said creating the traffic flow from East Monticello to North Second Street was an improvement.

“We wanted people entering from Monticello Street,” he said. “The reason we chose that location is because it puts the bus exit and entry door against the school building, so it keeps students from crossing in front or behind buses. It’s purely a safety issue for our kids on the bus.”

All vehicles will enter the campus from East Monticello Street, so Collins encourages motorists to avoid that area in the mornings before 8 a.m. if possible.

Students will still be able to park on East Monticello and in the parking lot across the street from the front entrance of the school. They can also park on the side street — High School Street — between the school and the cemetery. That street is barricaded at East Monticello Street between 8 a.m. and 3 p.m.

“During the school day it’s closed to the public, but in the evening it’s open to whomever,” Martin said.

The results of Mississippi’s statewide assessment of learning in pre-k and kindergarten show that the majority of the state’s youngest... read more