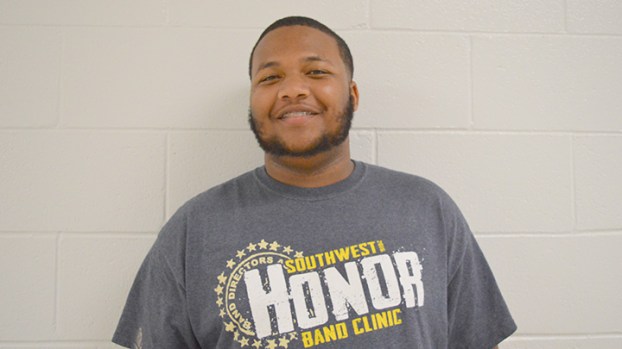 Louis Parker marches to the beat of the music in everything he does.

Parker, 21, has been a Brookhavenite since birth.  He is the son of Louis and Julia Parker, and has a 16-year-old brother, Julian.

“Music is important to me because it shows different emotions,” Parker said.  “It’s everywhere and in everything you do, and it just gives me a good feeling.”

After graduating from Ole Brook in 2015, he got an associate’s degree from Copiah-Lincoln Community College before heading to Jackson State University.  He expects to graduate JSU in 2020 with a degree in music education.

He has worked on and off for Piggly Wiggly on Hwy. 51 for four years.  When he isn’t at school, Parker attends Bethel African Methodist Episcopal Church.  He likes music, obviously, but he also enjoys watching TV and hanging out with friends.

Parker has been involved in band since sixth grade and has pursued his passion all the way up to JSU, where he is a member of the Sonic Boom of the South.  He started with the French horn, but has added trumpet and piano to his repertoire.

His favorite food is the meatloaf his mom makes.  For Parker, one interesting tradition is the family reunion that is held every two years, where during the get-together everyone discusses family history.

One interesting fact about Parker is that he was selected to perform in Carnegie Hall in New York during his freshman year of college choir.

Parker’s kindness is well-documented in his circle of influence.  He said people are always telling him how nice he is.   Parker hopes to work as a band director after graduation.

“Music is a big part of my life, and it always will be,” Parker said.