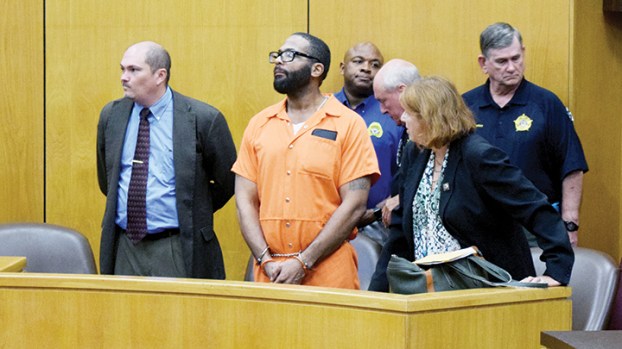 A simple discussion about the county’s budget got sidetracked into specifics Monday, and the county’s top lawman and head court administrator provided supervisors with some insight into what could be the biggest trial in Lincoln County history.

During a discussion about the projected cost of the capital murder trial for Willie Cory Godbolt, Lincoln County Circuit Clerk Dustin Bairfield told supervisors Judge David Strong hopes to move the trial to conclusion by the end of 2019 and will either import a jury from another county, where coverage of the 2017 Memorial Day weekend murders has been less prominent, or move the proceedings across the state.

Bairfield also indicated the judge has grown impatient with the progress of the Mississippi Forensics Laboratory — as of Thursday, the district attorney was still waiting on autopsy reports on three of the eight victims in the 14-month-old murders — and is considering calling crime lab officials to court to answer for the speed of their work if all autopsy reports aren’t turned in by Godbolt’s next status hearing on Nov. 13.

“It’s been very frustrating for me, and for the families,” said Lincoln County Sheriff Steve Rushing, who took supervisors’ questions alongside Bairfield. “We’ve called everybody from the governor on down asking for help, and I’ve beat the drum for more funding for the crime lab before.”

Godbolt is facing four counts of capital murder, four counts of first-degree murder, attempted murder and kidnapping charges in connection with the May 27 and 28, 2017, murders of eight people from Bogue Chitto to Brookhaven. He was arrested early on May 28, 2017, and has been held in the Copiah County Jail ever since, making three quick appearances in Lincoln County Circuit Court for status hearings.

Supervisors began questioning Bairfield and Rushing about the Godbolt trial during an afternoon budget workshop, trying to nail down an estimate to include in the Fiscal Year 2019 budget, which takes effect Oct. 1. Bairfield is requesting an additional $95,000 for the circuit clerk’s office next year to pay for a busy election cycle, and supervisors wandered into court costs, too.

“That trial is going to cost us,” Bairfield said.

Supervisors have often complained about the cost of housing Godbolt in Copiah County while the millstone of justice slowly turns, and are nervous about the cost of the upcoming trial. They budgeted $85,000 for the trial in the current fiscal year, and while little of that amount has been spent, it won’t be nearly enough if the court orders a jury brought into Lincoln County, in which case the county would be responsible for housing, feeding and protecting the jurors.

A piece of Brookhaven’s industrial history may soon crumble to the needs of the future after being purchased by its... read more