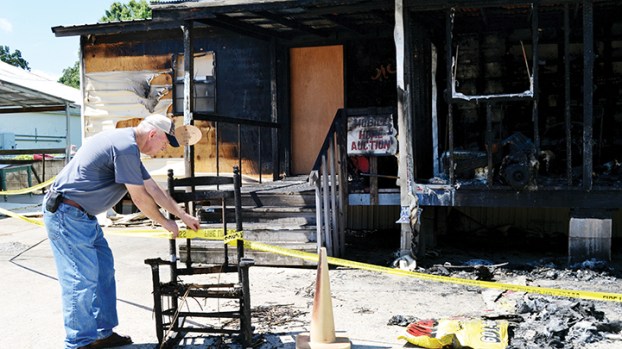 Photo by Donna Campbell Wayne Ashmore was at his shop, Blue Bayou Market and Bait Shop, Wednesday to examine the damage done by fire Monday night.

Even though his store, Blue Bayou Market and Bait Shop, got scorched Monday night in an electrical fire that burned the face off the little shack, Ashmore’s live bait survived the quick blaze and is still for sale, yellow police tape notwithstanding. Although the building’s facade is charred and burned away, Ashmore said he and his family will keep on serving bait-buyers on their way to the water hole while they repair the building.

“Believe it or not, most of my worms and minnows and crickets survived — not a lot of the fire got inside,” he said. “I’ve had a lot of the same customers come in and express their sympathy, and I say, ‘Hey, it’s just a thing.’ We’ll be alright.”

Ashmore, 78, retired from AT&T and opened up the bait shop in 2011. He said most of the little trailer in which the shop operates is undamaged, and he’ll work on pulling off the fried front porch and blackened front walls in the coming weeks.

“Chism’s Diner is letting me borrow a little electricity to keep the lights on for now,” Ashmore said. “The fire department did a good job saving my building.”

In the meantime, he has two requests — that customers use the side door, and that 18-wheelers be careful in the parking lot.

“It looks like somebody, maybe with a big truck, turned around up in there and hung the service line, and it pulled the service pole toward the bait shop,” said Brookhaven Fire Department Chief Tony Weeks. “That made the hot line connect with the metal roof, and evidently it skint the line and exposed the energized wire. You can see where it arced there and melted the tin roof.”

Weeks said he was sure the fire was started accidentally, and he has no idea who may have been driving the rig that likely caused it. There were no witnesses and no security cameras recording when the power pole leaned down and touched the building, though a neighbor said big trucks turn around in the bait shop parking lot “all the time,” he said.

“If that had happened later on at night, it probably would have burned the whole thing up,” Weeks said. “The people across the road saw the fire and called it in.”

Lawsen Brown is putting on her boogie shoes, though the 2-year-old may need some help tying the laces. She can... read more