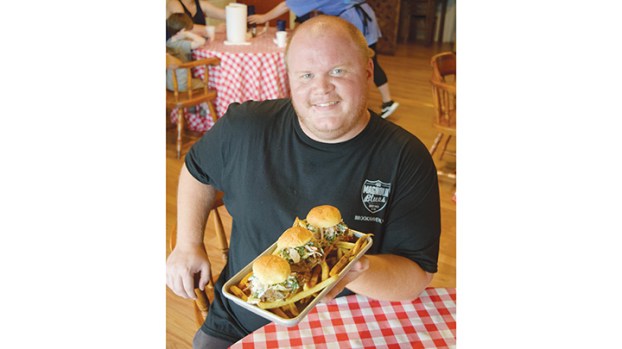 Photo by Adam Northam/Carl Craig, owner and chef of Magnolia Blues, shows off the duck confit sliders that recently won first place in the Natchez Food and Wine Festival.

Ducks in a row — Magnolia Blues wins first at festival

Last weekend in Natchez, a Brookhaven chef faced the South’s greatest cooks and covered himself in glory, and duck fat.

Magnolia Blues owner Carl Craig took home first place honors at the 2018 Natchez Food and Wine Festival, beating out around 30 other invited chefs from around the region to take home a certificate and bragging rights for best dish at the prestigious annual festival.

“I felt proud to just get invited, and it felt good to have someone say, ‘Y’all were the best one here tonight,’” Craig said. “It was a real team effort from Magnolia Blues, and every cook we have contributed.”

Craig and the Magnolia Blues team won the prize by cooking BBQ duck confit sliders, served with collard green coleslaw and duck fat fries. The farm-raised drakes were cured in Craig’s secret cure, washed and dried and cooked low and slow, in their own fat, for five hours.

Craig said he chopped up the meat from the bottom-most pans in the oven, which cooked quicker and caramelized on the edges, and distributed it throughout the dishes.

Confit is a French culinary technique that began as a way to preserve meat, and Craig decided to use it to give his restaurant — a dim dive where walk-ins are welcome and rock n’ roll plays on the PA — a chance against the finer establishments competing in Natchez.

“Being that we’re a barbecue restaurant, I wanted to showcase our barbecue. But there were some heavy hitters in there and I didn’t just want to take pulled pork,” he said.

Magnolia Blues’ duck confit sliders were tasted by dozens of visitors to his booth, the secret judges hidden among them. The little sandwiches were found to be superior to offerings from White Pillars, a fancy Biloxi restaurant run by a chef classically-trained in New York City. They were better than the dishes prepared by Memphis’ famous Beauty Shop Restaurant and Jackson’s Walker’s Drive-In.

“There were several Beard awards in the room,” Craig said, referring to the James Beard Foundation Awards for excellence in cuisine. “But we didn’t really have any time to be intimidated. We unloaded, set up and, before you know it, there were so many people coming by. I have a row-your-own-boat philosophy, anyway. I was worried about how my dish was, not everyone else’s.”

Craig said his serving table was small, maybe a couple of feet wide. From that little surface, he served about 550 helpings of duck confit sliders, four at a time.

After 90 minutes of cooking and serving, Craig said he finally got time to wander the convention floor and try some other dishes. While he was walking, the judges made their selections.

“We weren’t really expecting our name to be called. We knew our food was good, but we’re a small dog compared to a lot of other places, so we didn’t want to get our hopes up,” he said.

But the words, “first place, Magnolia Blues” were announced. There was no prize money — Craig’s crew lost money serving up all those ducks — but there was pride and, hopefully, recognition.

“We went over there and country-boy’ed ‘em, that’s for sure,” said Austin Williams, service manager at Brookhaven Honda and Craig’s partner in Magnolia Blues. “I hope it gives people from outside Brookhaven a reason to come to Brookhaven. A lot of people at the festival were asking us where we were, what exit to take. I told ’em, ‘Exit 40. Come on down.’”

Williams said it was a nice prize for Magnolia Blues, which is in its fifth year of operation and has grown considerably in the last two years.

“Hopefully the next year will be more exciting than the last five, and things have gotten better every year,” he said. “It’s been quite a ride — we didn’t expect, from the gate, to do what we do now-a-days by any means.”

In the meantime, Magnolia Blues has duck confit sliders on the menu until the duck is gone. Craig also plans to start offering more menu items fulltime now that the restaurant has been upgraded with a large walk-in cooler — brisket, steaks and the prime rib “sando” will soon be available every night.

A Brookhaven alderman told a would-be chicken wing entrepreneur he’d be the first to eat at his restaurant, but still... read more