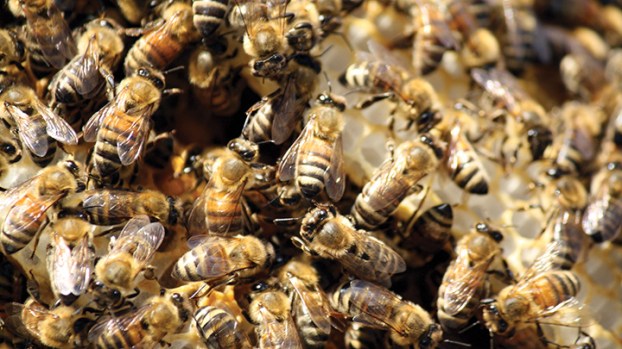 Experts: Mosquito spray nothing to get buzzed about

It was the land of wood and honey.

Behind the plaster walls, deep in the warm safety of 100-year-old timbers, a hive of around 30,000 bees built their home inside Brookhaven’s grand old Edgewood mansion on Storm Avenue. A crew renovating the home discovered the colony earlier this year, and the call for help immediately went out to local beekeeper Wes Fitzpatrick.

“That was quite an interesting project. I’ve pulled bees out of from inside houses people were tearing down before, so it didn’t matter what I did to the walls — but we had to be kind of careful in there,” Fitzpatrick said. “We took them out from the inside, and that hive is doing real good at our place in Brookhaven right now.”

Fitzpatrick, 65, has around 30 hives between his home off Zetus Road and his blueberry farm, Crystal Springs Farm Market, in Copiah County, with a total of around 675,000 honeybees pollinating his produce and making honey. Out there, the industrious insects are isolated, safe from contractors or worried mommas with bug spray.

In the city limits, bees have a tougher time.

Every night in Brookhaven, mosquito trucks roll through the wards, fogging up city streets with clouds of insecticide that is targeted at mosquitoes, a taxpayer-funded blast of aerosol protection against West Nile Virus. But the same juice is also harmful to honeybees, aquatic organisms and — in high enough doses — human beings.

But the doses are small and the drivers are careful, said Brandon Cobb, supervisor with city-contracted mosquito-sprayers Vector Disease Control International.

“We’re not killing the honeybees — they are a beneficial insect we want to try to protect,” he said. “The citizens of Brookhaven should not be concerned with what we’re using and how we’re using it. One of the first things we look at when we go into a job is protecting the environment, because we live here, too.”

VDCI uses an insecticide called Perm-X UL 30-30, which is composed of 30 percent permethrin, a chemical originally developed to treat scabies and lice and later developed for pest control. It kills mosquitoes on contact by altering their nerve membranes.

The Environmental Protection Agency’s 2009 permethrin fact sheet lists the chemical as likely to be carcinogenic in humans by oral ingestion — based on tumor growth in lab rats — but the agency lists dietary and all residential use concerns as below its level of concern.

Permethrin is also toxic to aquatic organisms, including fish and invertebrates, and the EPA recommends it not be applied over bodies of water. It is restricted for crop and wide-area applications, except for mosquito control.

The EPA also says Perm-X UL 30-30 is highly toxic to bees and insists the pesticide not be sprayed on blooming crops or weeds while bees are active in the treatment area.

Down for the night

For bee safety, timing is everything.

“They are daytime insects, and we spray in the evenings, and at night, when they are bedded down,” Cobb said. “We avoid spraying when they’re out, and when we do have to spray during the day we check to make sure there’s no honeybees around.”

On top of timing, Cobb said the company uses very low doses of Perm-X UL 30-30 mixed with mineral oil. The mineral oil carries the permethrin on microdroplets that hang in the hair and slowly sink to the ground, where the chemicals begin breaking down.

Cobb said the chemical becomes inert when the mineral oil dries up, usually taking six to eight hours, and sunlight also breaks it down.

“We would really have to be trying to kill honeybees,” he said. “The chemical we use in a low concentration, directed at mosquitoes — if they’re flying, they’re dying.”

Cobb said anyone concerned about having their bees or gardens exposed to the nightly spraying can call the VDCI headquarters in Jackson at 769-572-5708 and ask that drivers shut off the pesticide spray in front of their property. The company also shuts down for yellow and black “Bee Aware” flags.

Cobb said there are no beekeepers in Brookhaven’s city limits who have contacted him, but VDCI honors no-spray requests in other Mississippi cities where it operates.

Jeff Harris, an associate extension/research professor with the Mississippi State University Extension Service who specializes in honeybees, said the onus for protecting bees is on the beekeeper, and the most important factor is distance.

Hives should be placed at least 120 feet back from the road where mosquito trucks operate, and hive entrances should be turned away from the road. When possible, place the hives behind bushes or trees, which will serve as a wind barrier and protect the hive against pesticide drift.

“Right now in the Delta, there’s somewhere between 20,000 to 25,000 bees that have been brought to the soy bean fields to make a honey crop,” Harris said. “But soybeans are sprayed eight or nine times per summer, so they try to find a little patch of trees and move their bees under them to serve as an umbrella to protect against the drift. They can make their honey and avoid killing a lot of bees at the same time. The best defense is how you position your bees.”

For citizens without beehives who just enjoy the buzz of bees in their gardens, Harris said there is little risk of mosquito-sprayers wiping out bee populations. Hives send out foragers mainly between 10 a.m. and 2:30 p.m., well away from spraying times.

“The biggest risk from the mosquito truck is pesticide drifting onto the ‘beard’ at night,” Harris said. “When it’s hot like this, bees form what’s called a beard on the outside of the nest during the night — the older bees will vacate to help keep it cooler — and you could have a pound or two of bees hanging on the outside of the colony.”

With hives moved back and garden bees mostly dormant during pesticide spraying, there is little for bee-lovers to worry about as VDCI sprays down Brookhaven at night.

“This idea that honeybees are disappearing from the planet at a rapid rate and dire consequences are happening, that’s all a myth,” he said. “Honeybees aren’t even native to North America. I look at them as livestock.”

Harris said an outbreak of colony collapse disorder from 2006-2010 snapped the nation’s attention to honeybee health, and insecticide got the blame. The real issue was a combination of factors stressing the bees, including bad nutrition, transport of colonies and pesticide exposure, but the biggest colony killer is the Varroa Destructor mite, a parasite that feeds on, and spreads diseases to, honeybees.

Harris has studied the Varroa mite for 20 years.

“Our bees are the least healthy they’ve ever been because of the parasitic mites, but beekeepers are learning how to manage it. It’s just something we have to deal with,” he said. “A lot of people are convinced honeybees are dying from the planet and, once we lose them, our food production will die and we’ll die shortly thereafter. We actually have more bees now than we’ve had in the last 30 years in the U.S. — around 2.9 million hives. There were more in the 1970s, but people got out of beekeeping.”

Two already in race for Lincoln County School Board

Qualifying for the Lincoln County School Board is off and running, and already two candidates have filed their petitions of... read more