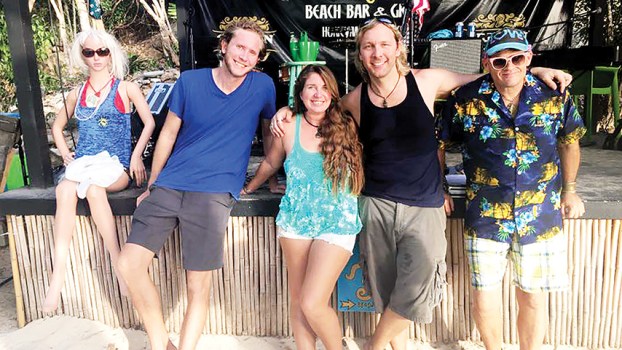 Photo submitted/The Shane Prather Band will perform Sept. 7 during the Lincoln Civic Center fall fair. Picture are, from left, Brad Goodson, Haley Goodson, Shane Prather and Zenith Apollo Star, who are all from the U.S. Virgin Islands. Not pictured are Brad Miller of Hattiesburg, Steve Sanford of Collins and Jeff Boone of Angie, Louisiana.

A Brookhaven native is bringing a little taste of the Virgin Islands to Southwest Mississippi in September when his band performs at the Lincoln Civic Center fall fair.

The Shane Prather Band will be onstage at the multipurpose building Sept. 7. Doors open at 6:30 and the show starts at 7 p.m.

The midway is open Sept. 5-9 at the Lincoln Civic Center. Organizers decided the community wanted more family-friendly events at the facility, said civic center director Quinn Jordan. So they’re planning for a fall fair with rides, food, games and entertainment, similar to the Mississippi Spring Fest and Fair held in April.

“That came off the success of the spring fair and the enjoyment of the community,” he said.

Mitchell Brothers and Sons Amusements will be bringing some thrill-seeker rides to spin, twist and turn riders in mid-air on the midway as well as classic rides like the Ferris wheel, star flyer and swings.

Armbands allowing unlimited rides will be sold. Prices change based on the night, Jordan said. Parking is free.

Tickets for the concert Sept. 7 are $15 and can be purchased in advance at Brookhaven Music and Sound, Providence Hills, Davis and Company Salon and Wand Seed Store or through www.shaneprather.com. A limited number of tickets will be available at the gate, Prather said.

Prather, a graduate of Brookhaven High School, grew up in Lincoln County. One of Prather’s earliest memories of music is sitting in front of his parents’ old 8-track and record player console singing along to the Oak Ridge Boys’ “Bobby Sue,” “Elvira,” and “So Fine.” He’d replace the names of his girlfriend in place of the girl names on the record and sing his heart out, he said.

He took piano lessons at the age of 8 and played old Pentecostal gospel hymns while his grandmother played tambourine.

His first public performance was playing the wedding recessional at his sister’s wedding when he was 12. At about the age of 13, Prather’s musical taste began shifting to rock music and began to shy away from the traditional gospel songs.

Years later, a college girlfriend gifted him with a guitar for Christmas and he hasn’t put it down. Prather moved to Dallas, Texas, in the fall of 2003 and started a karaoke and DJ service while sharpening his guitar and singing skills with the aim to move to Nashville to begin a full music career, which he did a year later. He spent six years in Nashville and has produced three albums, before moving back to Brookhaven for a while. He’s been living in St. Thomas in the U.S. Virgin Islands since 2016 to put together an island tour and to work on an underwater marine photography book.

Prather said he played a few gigs in Brookhaven in 2015 but hasn’t been here with a full band in a while. He’s talked to fans here at home about coming back for a while.

“It’s just been a matter of the right time,” he said. “We’re very excited. Coming home is important and playing for the hometown folks.”

He’d like everyone to come see him in the Virgin Islands, but since that’s not possible, he’s bringing the sound here.

“I want them to be a part of what I’m doing now,” he said. “I’m going to bring part of the islands to them.”

A Jackson man accused of robbing an 82-year-old woman at gunpoint in the Walmart parking lot Tuesday was jailed after... read more