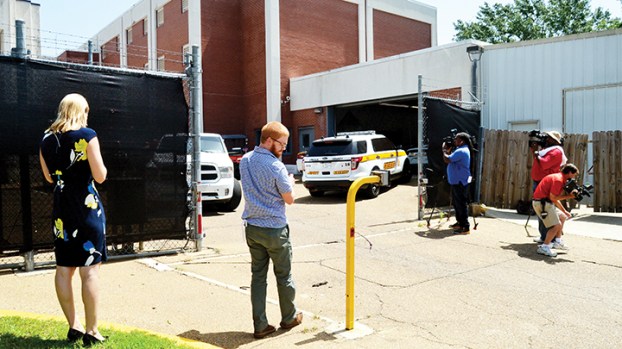 Photo by Donna Campbell The Lincoln County Jail is one of the county entities that will benefit from the Board of Supervisors’ proposed budget as presented Tuesday.

After weeks of tough talk about slashing spending and learning to “cut back,” county supervisors on Monday pulled an about-face and greenlighted every budget request set before them but one.

The jail, the courts, economic development agencies and other departments and funds under the control of the Lincoln County Board of Supervisors were either sustained at current funding levels or given increases to offset the cost of rising insurance premiums, except for Lincoln County Emergency Management Director Clifford Galey, whose request for an additional $5,094 for insurance costs in his office was denied.

Besides Galey, supervisors reached a consensus on every other line item in a proposed $20.9 million county spending plan for Fiscal Year 2019, pumped up by higher-than-expected county property assessments and expired exemptions on some properties that caused the value of one tax mill to increase from $236,000 to $249,000. The result is a proposed budget that contains more than $400,000 of additional spending for the county — a 2.4 percent increase over last year — with a millage increase of only one-half mill, earmarked for new radios for the county’s volunteer fire departments.

Combined with a $4.8 million appropriation for the Lincoln County School District that contains $408,241 in new spending — a 9 percent increase over last year, which the school board requested and is entitled by law to receive — supervisors stand ready to pass a $25.7 million budget with around $890,000 of additional spending.

The board will hold one last budget work session at 9 a.m. Aug. 28, before setting the date for the public hearing in September at which next year’s budget will be officially adopted. The new budget takes effect Oct. 1.

The new money in the county’s general fund includes close to $144,000 for insurance premium increases across all the courts and county offices; more than $137,000 for the Lincoln County Jail, which is housing and feeding more inmates than the previous budget allotment could sustain; $95,000 for a busy election calendar that begins in November and runs into 2019; and $15,000 to cover falling revenue in the district attorney’s office.

Supervisors will also throw another $200,000 into the solid waste fund to offset higher trash pickup fees without raising garbage bills, and use some of the bonus money generated by the climbing assessments to pump more than $170,000 into their bridge funds.

The board is also planning to continue its annual $228,000 appropriation to the Lincoln Civic Center, an agreement that appears to be the end of District 5 Supervisor Doug Falvey’s quest to cut back on recreational spending in favor of roads and bridges.

“I still think we need to take the money away from the civic center, but y’all don’t agree with me,” Falvey told the board Monday. “Pat McCullough stood in here and told us they had more than $220,000 in cash, so this will give them more than $400,000.”

Falvey and District 1 Supervisor and Board President the Rev. Jerry Wilson were against funding the civic center and nearly every other line item Monday, with the two slash votes opposed by civic center supporters in District 2 Supervisor Bobby Watts and District 4 Supervisor Eddie Brown. The tie-breaker came down to District 3 Supervisor Nolan Earl Williamson, who took a long time to respond and, once he did, moved quickly on to the next item.

“For right now, let’s leave it like it is,” Williamson said.

The same pattern emerged on other contentious votes — Falvey and Wilson were ready to cut until the other three supervisors united against them, usually after long pauses in which supervisors seemed hesitant to make a decision one way or the other.

The Brown-Watts-Williamson triumvirate got Lincoln County District Attorney Dee Bates his $15,000, with an assist from Lincoln County Sheriff Steve Rushing, whom the board asked to verify Bates’ need.

Rushing also used the opportunity to suggest criminal justice reform, saying part of the reason his inmate costs are so high is because the DA’s office is not pushing cases through fast enough.

“I’m not putting down on anyone in the court system, but some of these costs are killer. I’ve got three down there now waiting almost a year to be indicted,” he said. “The longer they sit, the more it costs. If we ever want to get this jail cost situated from year to year, I’ve gotta have some help. There’s ways (the DA’s office) can help me cut down on those costs.”

Supervisors considered other cuts and new ideas, but didn’t immediately act on them.

They discussed asking the City of Brookhaven to pick up half the tab for an upcoming $50,000 project to repave the courthouse parking lots; they considered slashing the $80,000 payment for the new spec building at Linbrook Business Park since McLane Southern is now renting the facility for $13,500 per month; and they considered halving the $100,000 allotment to King’s Daughters Medical Center for the operation of its ambulance service.

Brown seemed sympathetic to Wilson, but did not press the issue.

“And 90 percent of their property is tax-exempt, too,” he said.

Supervisors did invite Kevin Smith, co-owner of ASAP Ambulance, back to the next board meeting to discuss terms. Smith addressed the board earlier in Monday’s meeting, promising to match KDMC’s response and beat their price. He didn’t discuss money Monday, but said his company’s average response time in neighboring Copiah County for July was 14.5 minutes.

Bro. Ken Kirk was good at making appearances, but not long visits. He’d pray and minister to those who needed... read more