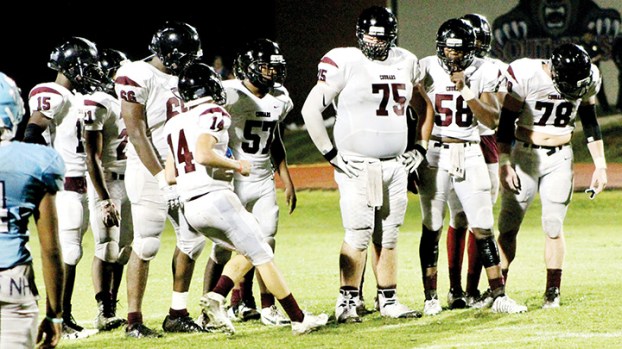 Road graders, hogs, big fellas up front, unsung heroes of the offense. There are a lot of clichés that come to mind when one thinks about the position of offensive lineman.

When things go bad, when penalties pile up, and sacks get a quarterback hurt, they are cast into the spotlight. When things go great – when they work together like a well-oiled machine — they still won’t hear their names called over the stadium PA.

The Lawrence County Cougar offensive line is a tight group, six seniors and one junior. Their performance in week one against North Pike was dominating. Cougar ball-carriers combined for 444 yards of total rushing.

Running most of the night between the tackles — Lawrence County only attempted one pass in the game — the offensive line played physical and fast as a unit.

Rutland, the center and biggest man in the group, says the group has a tight bond.

“In the summer, after workouts, we’re always together,” said Rutland. “We’re either swimming or eating at the Mexican restaurant.”

For Kelly, that bond is the best part about being on the offensive line.

“The chemistry you have with the guys that line up beside you, that’s the best part,” he said.

Moreman, Kelly, and Rutland — the three biggest players in the group — all feel like they share in the leadership mantle.

Moreman lines up at left tackle and Kelly — known to his teammates as Juice — lines up at left guard. Smith (tackle) and Harris (guard) make up the right side of the line. Lewis and Bogan (the lone junior) are the tight ends.

“They’re a great group of guys that have to set the tone for us,” said Lawrence County head coach Jesse Anderson.

Everybody in Monticello loves the group of big, gregarious lineman. The only exception to that may be the owners of the local Pizza Inn. Rutland says that the group can do major damage to the buffet when they get together.

“Pizza Inn loses money when I hit the buffet, no doubt about it,” he said.

Logan Smith transferred to Loyd Star in eighth grade. A year before at Brookhaven Academy, he played on the seventh... read more