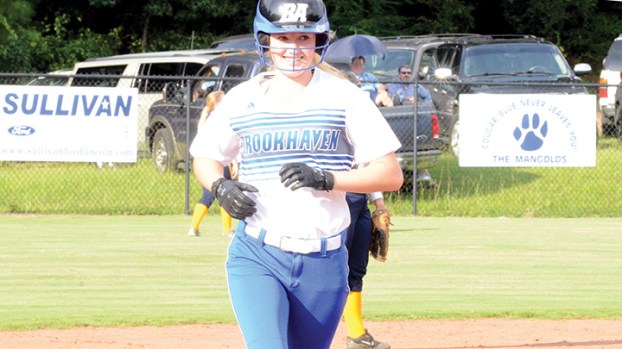 The Lady Cougars seemed to score at will, as they managed to bring runs across the plate in every inning. Brookhaven Academy jumped out in front early and never looked back.

“I went up to the plate looking for the pitch to be on the outside,” said Lady Cougars freshman Abby Richardson. “Broome pitched inside and I just turned on the pitch. Defensively, our pitchers kept us in the game and I was able to make plays behind them.”

The Lady Cougars broke onto the scoreboard first, as Richardson blasted a one-out home run over the left-field fence. The Lady Saints limited the damage to just one run as they were able to pop up the next two batters.

After walking a batter to start the second inning, Brookhaven Academy’s defense stood tall as they were able to strand the batter, getting the next three batters out on a pop up and two strikeouts.

The Lady Cougars added another run in their half of the second, as Jana Case managed to reach first safely off a Lady Saints’ error, which saw a run come across home plate.

Brookhaven Academy started to pull away in the third inning. Madison Moak got things started with her leadoff triple. Richardson followed by blasting another home run over the left-field fence.

With two outs, Morgan Smith drove in a run off a single that managed to get by the Lady Saints’ short stop. Emily Felder finished the scoring in the third inning, hammering a two-run home run over the left-center fence.

The Lady Cougars put the game out of reach in the fourth inning. With the bases loaded and no outs, Madi Smith nailed an RBI double. Morgan Smith added to her RBI total with her two-run single with two outs.

Brookhaven Academy finished the scoring as Case, once again, was able to take advantage of a Lady Saints’ error, making it to third base while two runs crossed home plate to run-rule Prentiss 13-0.

“We didn’t have patience at the plate early in the game,” Lady Cougars coach Becky Flowers said. “As the game went along, we were able to have patience and let the ball travel. We had several big key hits. Morgan came through for us with several of them. Our pitching did a great job tonight, not allowing Prentiss to be able to put the barrel on the ball.”

Despite being under the weather, Madi Smith got the nod for the Lady Cougars, going three innings while allowing no runs and no hits and striking out three. Fielder pitched in relief.

Broome took the setback for the Lady Saints.