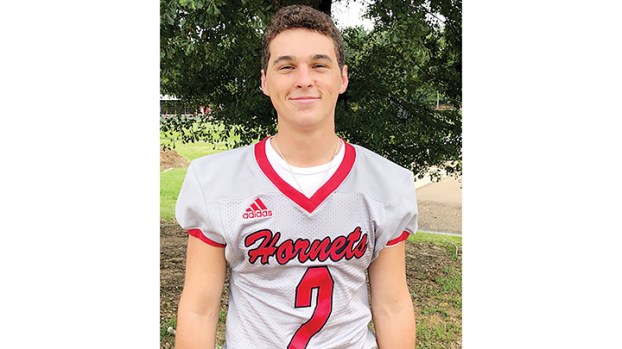 Logan Smith transferred to Loyd Star in eighth grade. A year before at Brookhaven Academy, he played on the seventh grade football team.

In Loyd Star’s season opener against Sacred Heart, Smith ­— a senior — suited up in a football game for the first time since that seventh grade season. His play at cornerback — including seven tackles and an interception — has earned him The Daily Leader Defensive Player of the Week.

His buddies call him “Poe” and Smith can’t quite explain where that nickname comes from. Something about looking like a Panda when he was in junior high.

Friendship is actually what brought Smith back to football after being away so long.

“I wanted to play with my friends,” said Smith. “I also didn’t want to graduate and regret not playing. When I got to Loyd Star I was new and was just trying to make friends. I realized that this year was the last chance I would have to play with those friends.”

Loyd Star led 27-6 at halftime, but in the third quarter Sacred Heart was moving the ball. A Crusader comeback was not out of the question.

Sacred Heart quarterback Zach Weatherell threw for more than 1,600 yards and 12 touchdowns as a junior.

Smith dropped back into coverage and read Wetherell’s eyes. He knew the quarterback was throwing deep and he dropped further into coverage to defend his area. Seeing the ball sail over the head of the receiver, Smith broke on it and came up with the interception.

Loyd Star head coach Brian Ford says the play gave his team a jolt as they would eventually cruise to a 45-13 victory.

“He picked one off at a time of the game when we needed somebody to make a play,” said Ford. “As a coach you just love to see a kid come out when they hadn’t been playing and become not just part of the team, but a contributor.”

Smith also led his team in receiving, catching four passes for 74 yards and a touchdown.

Don’t think he wasn’t nervous before the game, though.

“It was probably the most nervous I’ve ever been in my entire life,” said Smith. “I thought I was going to be sick, but when I got out there and hit somebody and got hit, it all went away.”

Smith has always played baseball and says his parents — Clay and Kim Smith — were supportive of him going out for football as a senior.

“Man, I wish I’d never stopped playing in eighth grade. I’m having a blast,” he said.